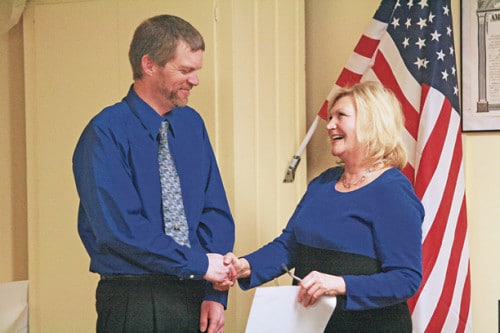 After a public hearing, testimony from neighbors and a discussion, the Winthrop Town Council granted a conditional-use permit to an excavating and gravel business on Horizon Flats Road at its meeting last week.

While the town zoning code did not require F&S Excavating to have a special permit to operate in the industrial zone, owner Andrew Oosterhof elected to apply for the permit to provide greater oversight of his activities and to accommodate neighbors who have complained about noise and dust.

Oosterhof has owned the lot for six years but the town did not become aware of his business there until this year, when neighbors complained about noise and dust, according to Winthrop Town Planner Rocklynn Culp.

Oosterhof worked with Winthrop over the course of the summer to obtain a business license. He also erected a fence and began to implement measures such as watering the site to control dust.

While F&S Excavating is in an industrial zone, some adjacent parcels are zoned for residential use, said Culp. The Horizon Flats area was created as a subdivision with industrial and residential lots in the 1980s, she said.

The conditional-use permit sets terms and conditions to mitigate noise, dust and visual impacts, particularly to the residential zone, according to the staff report. Screening of topsoil from gravel will be restricted to a maximum of eight days a month.

The council members unanimously supported the conditional-use permit, commending Oosterhof for making the extra effort to work with the town and his neighbors.

The council swore in Sue Langdalen as mayor and thanked outgoing mayor Dave Acheson with a plaque for “outstanding service and dedication” and a cake. “Things that are truly rewarding are generally challenging,” said Acheson about his eight-year tenure.

In other business, the council members:

• approved a loan agreement with the state for improvements to the town’s drinking water system.

• adopted a list of qualifications for the Winthrop Marshal, which will be used in hiring a replacement for Dave Dahlstrom.

• approved an agreement for preliminary engineering for the Riverwalk Trail.

• updated the town code regarding signs, patio covers and swimming pools to conform with the International Building Code.

• approved appointments of Lynette Westendorf and Ron McCollum to the Westernization Architectural Committee.