Marijuana will be treated like any other crop in Okanogan County if the county commissioners follow the recommendation of the planning commissioners not to require a conditional-use permit (CUP) for people to grow, process or sell marijuana in the county.

After hearing testimony from 19 citizens – more than half opposed to the special permit – the Okanogan County planning commissioners voted 3 to 1 on Nov. 25 to recommend against requiring a CUP. Planning Commissioner Dave Schulz, who represents the Methow, was the sole vote against the recommendation. Schulz voiced concerns about the imposition of another “unfunded mandate” on the county, including the potential for increased costs for law enforcement.

The decision on a conditional-use permit is about zoning – that is, where a business can be located and whether it is automatically permitted on a given parcel or must go through additional scrutiny. A CUP entails a detailed project description, an analysis of its environmental impact, notification of adjacent landowners and a public hearing.

The hearing was not a referendum on whether marijuana should be legal in the county, which was decided by the state’s voters last year, said Okanogan County Planning Director Perry Huston at the start of the public meeting.

Okanogan County’s current district-use chart authorizes “farms for raising all crops” throughout unincorporated Okanogan County, including the Methow Valley. Produce stands must have a
conditional-use permit in unincorporated areas of the Methow Valley but are permitted in the rest of the county. Cities and towns have their own land-use regulations.

In a brief discussion before their vote, planning commissioners asked about law enforcement and whether the 8-foot fences mandated by the state to obscure any field planted with marijuana would require special zoning permits. Ben Rough, senior planner for the county, said the county has no maximum fence height, but that any structure more than 8 feet tall requires a building permit.

In the end, the commissioners were uncomfortable setting a precedent by differentiating among crops. “What if someone doesn’t like cherries?” asked commissioner Phil Dart from Molson before the vote.

“Republicans are always in favor of less government control – how can you create a CUP to restrict the growing of this God-given herb?” asked a speaker from Tonasket. He was one of two at the hearing who offered his phone number to the commissioners so they could learn more about marijuana.

“Don’t supersede state regulations by creating an additional layer in the county,” urged an Oroville resident.

Dave Sorensen of Winthrop – the only speaker from the Methow Valley – noted that state guidelines covering marijuana are very strict. “This is a potential tool for revitalization of the economy in this county,” he said. As a builder, Sorensen said he welcomed the projects that could be connected with marijuana businesses.

All of those supporting the added scrutiny of a conditional-use permit were concerned that, without special regulations, it could become easier for youths under 21 to obtain marijuana. Most wanting the CUP identified themselves as connected with the Okanogan County Community Coalition, which works to reduce youth substance abuse and violence; several were employed in area schools. 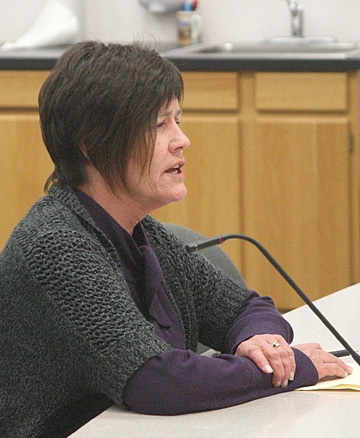 Lauri Jones, community health director for the county, said that requiring a CUP is an opportunity to protect public health in the county. She was one of several to worry about inadequate enforcement of the law. “There are only three liquor control agents for three counties,” said Jones.

Some opposed to the CUP proposal noted that the Washington State Liquor Control Board had already set up a comprehensive system to track marijuana “from seed to sale” and said they believed that legalization of marijuana would protect youths by bringing sales out of the black market. Several noted that marijuana remains illegal for those under 21.

One speaker from Brewster who works in real estate said he had already received inquiries from people interested in purchasing land in the county to participate in the marijuana business.

The planning commissioners appeared open to the idea of requiring a conditional-use permit for marijuana sales only, as were some speakers who opposed it for growing or processing. The recommendation against the permits did not differentiate between types of businesses, however.

The planning commission’s recommendation against a CUP goes to the county commissioners, who will hold their own hearing about the permit on Monday (Dec. 9) at 6 p.m. in Okanogan.

In Okanogan County, 40 individuals and businesses have submitted applications to the Washington State Liquor Control Board – 15 to become a marijuana producer (grower), 16 to be a processor, and one to be a retailer – as of Tuesday (Dec. 3).

Fifteen of the prospective Okanogan County growers also seek a processing license; only one of the processor applicants is not also applying to grow marijuana. The same entity is permitted to hold a license to grow and process marijuana, but anyone wanting to sell marijuana cannot also grow or process it.

One of the applicants for a producer/processor license provided a Winthrop address, two are in Carlton, and one is in Methow. The retail applicant is in Tonasket. Several applicants have filed for multiple sites in the county. The county has been allocated five retail locations; there are no restrictions in state rules about the number of growers or processors in an area.

Across the state, 1,329 people and businesses have filed applications for any of the three license types.

The Liquor Board is releasing only raw data about applications and has yet to verify any information. As a result, some of the information about applicants is unclear – for instance, one applicant provided a street address in Okanogan County but listed the city as Chelan.

The application period runs through Dec. 19. Although the window to apply is only 30 days long, applicants are not required to submit all materials, such as a business plan, before the deadline, according to a spokesperson for the Liquor Control Board.