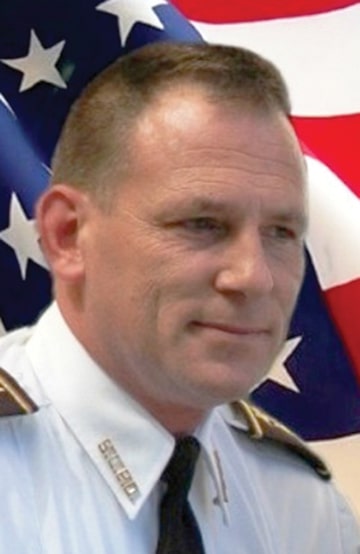 Jim attended Liberty Bell High School and later joined the U.S. Coast Guard. After his honorable discharge, he attended the police academy and various college and training courses. He married Pamela Ann Jordan on Sept. 14, 1996, in Seattle. Jim lived in various areas throughout Washington state: Seattle, Winthrop/Twisp, Ballard, Everett and eventually settling in Soap Lake. Jim served the City of Soap Lake as police chief until retirement due to his deteriorating health. He also worked for Asko Processing, John Scalf Investigations/Security, and served his country in the U.S. Coast Guard.

In addition, he was a certified firearms instructor. He loved riding his motorcycle, running the Soap Box Derby Race, fishing, camping, traveling, diving, and especially his family. Jim wanted to make a difference. He loved his community and thoroughly believed in community policing, and being there to be a “helping hand,” and he tried to bring community involvement through his various activities and service.

Jim was an active scoutmaster for the Boy Scouts of America, and he started the Soap Box Derby, which elicited national interest with his Boy Scout Troop. He enjoyed participating in the “chief for a day” program with other Grant County law enforcement and fire agencies. He also served as a volunteer with the Soap Lake Fire Department. Jim was an ordained minister for our Lord Jesus Christ and his faith was vitally important to him.

He was preceded in death by his parents, Lester and Gloria Dorris.

A memorial service to celebrate Jim’s life will be held at 11 a.m. Saturday (Nov. 2) in the Soap Lake Middle/High School gymnasium with Pastor Paul Ellis, formerly from Bethlehem Chapel and chaplain to the police department, officiating. Military honors will be provided by the American Legion and Military Funeral Honor Guard.