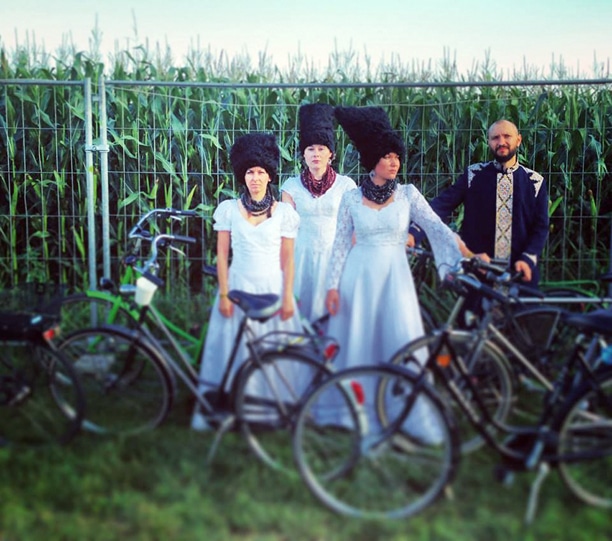 Touring in Europe, the Ukrainian band Dakha-Brakha draws large crowds at solo performances and world music festivals. Now on their first tour of the United States, DakhaBrakha will perform at the Winthrop Barn on Friday.

“When you look at where they’ve been on tour, it’s Chicago, Boston, Detroit, and now Winthrop,” said Amanda Jackson, executive director of Methow Arts, which is bringing Dakha-Brakha to the valley. The band arrives after playing in Toronto, Ontario, and future bookings include Belgium, Denmark and France.

“What we’ve found from our audience is they love different cultures, and things that are modern but based in a traditional root,” Jackson said.

DakhaBrakha fits that description. The group is three women and one man who perform world music rooted in Ukrainian folk tradition, but incorporating contemporary jazz and trance styles.

They term their musical approach “ethnic chaos” – a combination of order and structure that is an essential part of traditional and folk music, with the chaos of free form experimentation and improvisation.

“They ground their musical experimentation in the ritualistic songs of Ukraine and other Slavic neighbors and venture into a whirlwind of explosive rhythms and sound from Asia and Africa. Their sound is at once wildly exciting and mesmerizing and mystical,” according to information from Methow Arts.

The quartet performs on instruments from around the world, including percussion, didgeridoo, piano, tabla, cello and accordion. “But they are most known for their vocals. They have a beautiful range,” said Jackson.

DakhaBrakha was created in 2004 at the Center of Contemporary Art in Kiev, Ukraine. The group’s name means “give/take” in the old Ukrainian language.

Prior to their performance at the Barn on Friday, the group will perform at seven school districts, before 5,600 students, through the Methow Arts Alliance program.

Friday’s performance is at 7 p.m. Tickets are $25 for reserved adult seats and $10 for reserved student seats; $17 advance general seating; $20 at the door for adults and $5 for students and children.

Tickets can be purchased in advance through BrownPaperTickets.com, at Daily Business and the Methow Arts office in Twisp, and Riverside Printing in Winthrop. For information call 997-4004.