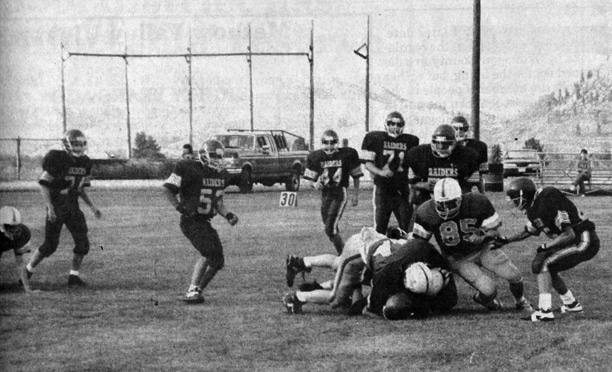 Methow Valley Promenaders square dance lessons will begin Thursday, Oct. 11 at 8 p.m. in the Twisp Grange hall. Lessons are open to everyone, including teens who may dance for half price.

The fourth Saturday of each month the Promenaders dance at the Twisp Grange hall, followed with a potluck dinner. Any interested future square dancer is most welcome to come.

The next dance will be held Sept. 22, with Ken Corrier from Okanogan calling.

Diamond Jubilee for Twisp! When?

Should the Town of Twisp have been celebrating its 75th anniversary this year or wait until 1984?

Records of the town show that H. C. Glover laid out and platted the town of Gloversville on July 30, 1897.

The dedication of the land was approved by the Board of County Commissioners on August 4, 1897, and filed with county auditor J. R. Wallace on August 5, 1897.

Gloversville contained only the area from Division Street on the west to Methow Street on the east and from Fourth Avenue on the south and included Twisp Avenue block on the north. Only Glover and Lincoln Streets were inside this area.

According to postal records supplied by postmaster Dorothy Dodge the first post office was established on January 22, 1898 with Glover as first postmaster. The name of Gloversville did not set too well with the federal postal service however, as there was already a post office of “Clover” in Okanogan county at the time, hence the name Twisp.

The new town of Twisp prospered, and a newspaper, the Methow Valley News, was established in 1903.

Bossy is Big Income-Earner in Washington

Washington’s 244,000 milk cows are the state’s second most important source of farm income, earning $76,589,000 for their owners last year, a survey by American Can Company reveals.

Dr. Glenn Cunningham, economist for the container-making firm, said dairy products rank behind only wheat in value to Evergreen State farmers. He pointed out that Washington cows produced an average of 6,870 pounds of milk each in 1952, 29 per cent above the national average and 6th highest among the dairy states.

The economist for the company which pioneered the development of the lightweight, disposable fibre milk container added that the state’s milk production exceeded one and one-half billion pounds last year.

Francis Lufkin took a crew of five men to Spanish Camp Monday to build an emergency landing strip there. The men packed in with horses where the emergency strip is located in a primitive area and will be made usable this week. Private airplanes are not allowed to use this strip for recreational purposes.

The aerial fire patrol route passes over this area and it was at this place that a forced landing was made by a fire patrol several years ago. The crew are Charlie Flagg, powder man, Tom Graves, Howard Betty and Wally Tower.

Nothing to Delay Building Coulee Dam

Spokane, Sept. 26 – Senator C. C. Dill gave assurance here yesterday, says the Associated Press, that $1,000,000 would be available within two weeks for construction of a bridge and other work at the site of the proposed $63,000,000 Grand Coulee Dam on the Columbia river.

Favored by Mr. and Mrs. Frank Airey and the latter’s mother, Mrs. J. M. Risley, the News force was treated Sunday to a highly interesting trip over the new forest truck trail, with a really toothsome picnic luncheon at noon for an additional thriller.

The Airey Chrysler was headed at 11 o’clock toward the Poorman C.C.C. camp. Passing through the route lead up Poorman creek and on up the new forest road past Black Pine lake, every foot of the route most highly interesting.

Considering that this new highway attains an elevation of  some 5,000 feet at the summit near this lake, there is scarcely a heavy pull on the entire route.

All declared it to be a mighty fine road, or a good car and driver, and maybe both.

The Methow Valley News archives are missing from September 12 through October 10, 1913.