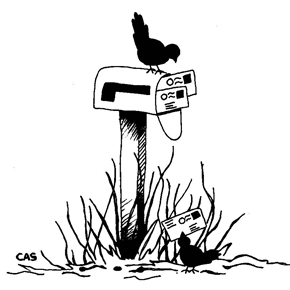 The Methow Valley is a peaceful place. Inconsistent with this quality of the valley is the name of the young people’s swim team – the Killer Whales.

Webster’s online dictionary makes it quite clear what “killer” means – “one who kills.”

Orcas, also known as “killer whales” for their ability to kill even large whales, are the largest members of the dolphin family. They are sleek, strong and very fast swimmers. These are the qualities that members of a swim team would like to be known for, and not that ability of the orca to kill other mammals.

The name Methow Valley Orcas would be much more fitting for the young people’s swim team.

Dwight Filer has shown his commitment and integrity to the Twisp community for decades. He fully understands the value of living in a small town in a rural area. He understands that people live here because they want to. They cherish the peaceful pace of living in a town surrounded by inspiring natural beauty. He understands that the quality of life here is not measured in dollars. He has helped us all experience a higher quality of life through trees that he planted and parks that he has helped develop. Dwight has shown his commitment to us all through his service on the Twisp Town Council and the planning commission. Dwight’s roots go deep here and you can be sure that he will work hard to preserve our way of life.

I have known Dwight as my plumber and friend for 20 years, and highly recommend him, and know he will serve with integrity, fairness, common sense, knowledge of the town’s present problems and future needs.

Dwight has no other agenda than to work with the council to better our town within our available budget.

No reason for war

Should the United States intervene with a military attack on Syria for allegedly using poison gas that killed about 2,500 of their own people? Syria is embroiled in a civil war. President Assad is the president of Syria and is defending the people from a rebellion. What is the reason for the war?

The president-elect leads the Baathist political party which is a coalition of Muslims of all beliefs radical or conservative, and includes Christians and Syriac Catholics, which dates from the time of Christ and others.

The rebel party is a radical party that believes in Sharia law which means that there is no peaceful coexistence, there are only three choices: convert to Islam, be executed or pay a sum of money and become a slave.

The Baathist party is a secular party but with strong Islamic beliefs, the same as Sadaam Hussein in Iraq, who was ruthless as also is President Assad.

So, Muslims are fighting Muslims with each side willing to practice genocide on the Catholics, some of which fled Iraq. They are caught in the middle. American journalists who are in Syria say it is unlikely Assad used the poison gas because he is winning, so there would be no point. Another Syrian mentioned that many things are staged with the use of a camera/cell phone. The Syriac bishops and many others in the region are begging President Obama not to do a military intervention.

Pope Francis called for a day of prayer and fasting on Sept. 7 for all Catholics and others of good will for peace in the world and especially no military attack on Syria. Some 100,000 people joined Pope Francis in St. Peter’s square for four hours. I for one joined him here in Omak. God can figure out what to do – we think we can, but we can’t.

The Methow Valley Senior Center board has agreed to provide $1,000 requested by Okanogan County Transportation & Nutrition. The funds will come from donations received by the center after a recent article in the Methow Valley News, along with proceeds from the annual Winter Sale.

Seniors coming to the center for lunch have inquired with concern about the bus and meal funding and several have offered to increase their own personal donations when they come in for lunch.

Many thanks to those who have given donations. Also, a big thanks to the people of the valley who provide the Rummage Room with good, usable items that can be resold and the volunteers who tirelessly sort through those items. Without all of you it would be impossible to keep the facility running or provide funds during these critical money times.