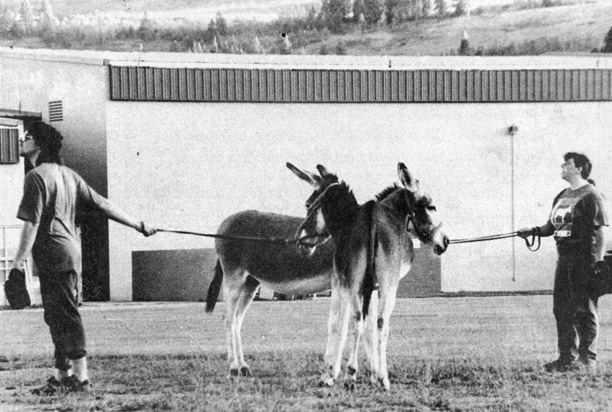 Dale Hutson (left) and Sheila White wait for the long ball in center field at last Saturday’s Donkey baseball game. The contest between Winthrop and Twisp firefighters drew an appreciative audience which heleped raise money for the Winthrop Fire Department. The firefighters from Winthrop were also the big winners, taking the game 6 – 3.

There’ll be a rootin’, tootin’ time in the ol’ Methow this Labor Day weekend as local cowboys join with other participants at a rodeo at the Sunny M arena near Winthrop.

The rodeo will be run by Claude Miller and Bonnie Dagnon with stock furnished by Jim McGowan of Tonasket.

There will be a concession stand at the area, featuring coffee, pop & hotdogs, for those viewers who get hungry or thirsty. A street dance, sponsored by and for the welfare of the Winthrop volunteer fire department, will climax the weekend fun Sunday evening at 8:00 p.m at Winthrop.

Methow Valley banks and post offices will be closed Monday, Sept. 3, Labor Day. There will be no school either on Monday.

The News was unable to contact some of the businesses at Winthrop at press time to see whether they would remain open on Labor Day.

Quote: “A really accomplished liar is one who has time for both golf and fishing.”

Saturday night at the community building, friends and neighbors had a wedding  shower for Betty Hurst and Walter Sloane. Mrs. Wilfred Byram of Twisp, Mrs. Greydon Patterson, Mrs. Cassal and Mrs. Edgar Sloane of Wenatchee and Mrs. Warren Willis assisted in opening the gifts. Cake and ice cream was served. There were 66 present. Hostess was Mrs. Warren Willis.

A crew of ladies were busy washing and polishing the windows of the Winthrop school this week. On the crew were Doris Washburn, LaRhee Lewis, Helen Larsen, Elma Fickes, Mary Helt and Laverna Merideth.

Joey Hough to Seattle Hospital – Mr. and Mrs. Rex Hough took their son Joe, Age 10, to the Orthopedic Hospital in Seattle for a possible skin graft this week. Joey was severely burned about three weeks ago when he and some of his playmates tossed a lit match into a gasoline can. The exploding gas caught his clothes afire but he had presence of mind to roll in the grass to extinguish the flames which is credited to saving his life.

The Poorman Creek-Black Pine Lake, major project of the camp, has made fine building progress. The road is now completed beyond Black Pine Lake, and soon the sub camp will be moved farther along to keep up with the work.

This popular fishing lake may now be reached by auto. Its major significance, however, is for fire protection, opening up a valuable stand of timber.

Dwight L. Filer  returned home Wednesday after a stay of three months at the Deaconess hospital in Wenatchee, recovering from a badly broken leg. He is now able to move around the house on crutches, and his mother brought him up in her car, to recuperate at home.

Dwight stood the trip up from Wenatchee well, and is at the home of his parents where he is receiving the very best of attention.

Labor Day will be celebrated in Twisp this year for the first time with the first grand ball in Twisp’s fine new opera house, the new Fraternal Hall, of the Twisp Fraternal Association, the finishing touches upon which are being made this week.

The engagement of Hall’s Orchestra for the occasion assures the public of the best music, and C.B. Jaynes, manager of the new house, will engage competent floor management, assuring those who attend of a most pleasant evening, with the best of decorum. The grand march will be called promptly at 8:30 o’clock, according to the bills, and supper will be served by the Rebekahs in the dining room upstairs.

The new hall will be lighted for this occasion by gas, as the electric lights are not on yet. The dance is given for the benefit of the hall, and the public is cordially invited to participate. Remember the date – Monday evening, Sept. 1 – Labor Day.