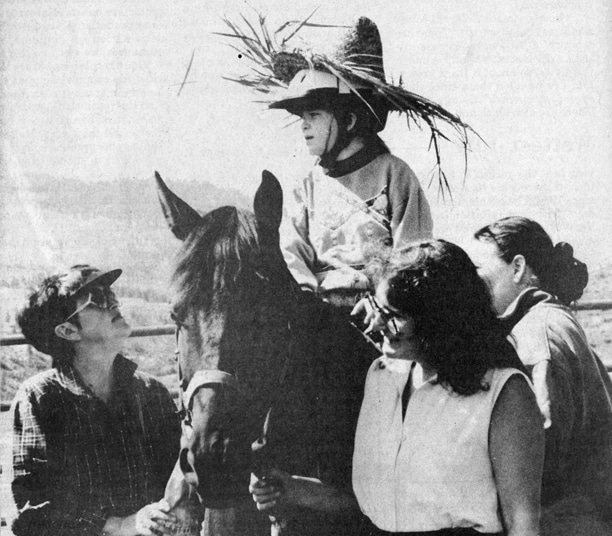 A Hat Race Winner – Jolie Reynaud is all smiles as she finishes a hat race, part of the fun-type riding games in a therapeutic riding clinic at the Golden Doe ranch south of Twisp. Volunteers from left are: Patty Sage, Judy Good Miller and Diane Costales.

The Class of 1953, Twisp High School, had a chance to look back over the years and reminisce when they held their 20th year class reunion Saturday night, August 4. Gag gifts were given to Gus Tilberg, New Mexico, who traveled the farthest; to Mikell Biram and Helen Dodge for having the most children, and to Verna Baughman for being a grandmother.

Apparently people are still unsure of how to call the fire department as there have been several mix-ups recently.

Twisp and Winthrop fire chiefs, Earl Austin and Corky Scharf, have requested that the following information be published so these errors can be corrected.

The public should know that the fire number is 997-2106 for all people living in the towns of Twisp, Winthrop, Mazama, and Carlton and in the rural fire district which extends from Cow Creek at the southern end to Lost river at the northern end. By dialing this number a siren is set off in the powerhouse at the Twisp sawmill where a worker is on duty 24 hours a day. This worker will answer the phone, get the location and decide which department is needed. He then pushes a button which sets off the siren in that fire department and when firemen arrive tells them where the fire is over the telephone.

There are two areas here that are very important for the people to realize. The first is that when they dial the fire number they should let the phone ring till someone answers.

Usually the workman is quite close to the phone but occasionally is downstairs when the siren in the powerhouse goes off and it takes him longer than two or three rings to get there.

The second important area of concern is that persons calling in do not always give an adequate location of the fire.

Fire chief Earl Austin said persons should state their name, give approximate distance of the fire from a town and stating whether it lies east, west, north or south of the town.

They should also, if possible, say what property it is, naming what river or creek is nearest the fire and on what side of the river it is.

Another area where people can help save property is to never assume someone else has turned in the alarm.

Has Close Call When Car Overturns

John L. Reeder, local attorney, was a lucky driver last Friday night, when on his way home from Okanogan, a deer ran into the road. John attempted to go around the deer, and hit a soft shoulder on the road. His car went into a roll, and John says he didn’t think a car could roll so long. He emerged from the car with slight bruises, while the car was almost a total wreck.

Science Film to be Shown Friday Night at Calvary Church

The film “Dust or Destiny” a 45-minute color and sound motion picture of the secrets of the marvels of science will be shown at Calvary Independent church Friday evening, August 7 at 8 o’clock. In the film will be pictured the mysteries of animal radar, navigation and sound; also fish that spawn on dry ground, and thru the miracle of a lapse time camera, how the eggs hatch and plants grow. An invitation is extended to all to view this film. Showing starts promptly tomorrow night (Friday) at 8 o’clock.

Editors H.E. and Mrs. Marble, off since the last issue on vacation, got started back on schedule all right, but did not effect arrival home till Wednesday evening. With battleships and bulb diggers and crews conflicting in the serenity of our peaceful repose of nights yet, we are struggling back onto the job, slightly half, but coming stronger. Miss Gertrude Selde was put on the bus for her destination at Portland. The time of our lives was had at a family reunion at the home of our son at Farghar Lake, over Sunday, continued at the home of our daughter at Bremerton. But gee, it’s tough to have to work again after so much fun – yet tougher if we didn’t have to.

The Methow Valley will be publicized next Sunday afternoon over KHQ broadcasting station to the wide world, complimentary of Mr. L. M. Davenport, operating the Davenport Hotel. Brains of the valley have been busy for the past week getting up dope to submit to the editor of the program to be published under the title of the “Northwest on Parade.” Listen in at one o’clock D.S.T., Sunday, August 6, and see what some of our folks think of our own MethowValley.

A camping party composed of Misses Emma Trainman, Enid Mullin, Gertrude Gordon,Mrs. Ida Libby, Dan McAllister and Ralph Marble left at an early hour last Sunday morning for a two week’s trip into the Ashinola country. They took along a large list of edibles, but expect to live largely on fish during their perambulations of the mountain stream.

It is said that the directors of consolidated school district 103 have purchased an automobile for Supt. Brinkerhoff to visit the schools in, and that Dick McLean has been engaged to deliver a course of lectures on “the moral uplift of the rural youth.” Dick has also been secured, the same report states, as lecturer for the grange, “the awful results of high living” the text in this instance. We do not vouch for the truth of this report, although Dick is said to have said that it is O.K.