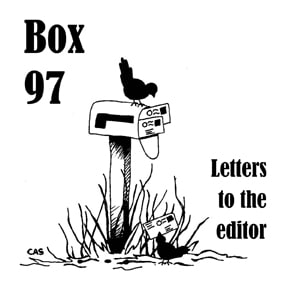 Interesting article on the wacky new state all-terrain vehicle law (July 3). Based on your reporting I have to agree with the president of the local ATV club that this law is confused at best.

How, for example does a regular four-wheeled car, in which you can be cited as a primary violation for not wearing a seatbelt, differ from an ATV, which, apparently doesn’t even have to have one? And you reported that on county roads as opposed to state highways, operators can be as young as 13 but only under adult supervision. Since you must be 15-and-a-half years old to get a driving learner’s permit, apparently motor vehicle licensing rules don’t apply to ATVs? What about liability insurance requirements?

Never mind that to ride a motorcycle on a public road I had to get not only a driver’s license but a special motorcycle endorsement, has the Legislature actually approved a bill making it possible for county roads to become motorized playgrounds for children?

I can certainly understand why western Washington liberal Democrats would vote for something like this. They can pretend to be hearty bi-partisans supporting the wishes of us eastern Washington yokels (never mind that both times ATVs on public roads came up for consideration last year in our local towns it was rejected) without the danger that anyone will actually be riding these in front of their houses in Bellevue and Seattle. Of course not. Their local yahoos will load ’em up and head over here to God’s country where they can exercise their manifest right to behave like children (the ones that aren’t actually children), trespass on our property and overtax our nearly non-existent rural traffic law enforcement. Awesome.

I had hoped the governor would veto this apparent pig turkey of a backroom deal. If the Olympia sausage factory wants to cram a law like this down the throats of us eastern Washington hillbillies, they should at least make their sausages with the lights on.

Be there for comp plan

The Okanogan County Comprehensive Plan will guide future land use in the Methow Valley and Okanogan County for years to come. The upcoming July 22 meeting of the Planning Commission presents an opportunity to citizens who are interested in seeing how they will respond (or not respond) to serious local concerns regarding water availability and land use.

Over 400 people attended county commissioner hearings on a draft of the new comprehensive plan at Liberty Bell High School in 2011. The process is now nearing completion and the Planning Commission may choose to act at this important meeting to improve the plan or to send it unchanged to the county commissioners for approval.

While several issues are at stake, lack of coordination between the current draft and scientific data on water availability in the Methow is one of the most critical. The most recent analysis shows at least 1,092 of the already-existing parcels in the lower valley from Twisp to Pateros will be without a water supply delivered by a permit-exempt well. Further subdivision will create a greater problem. Having water planning and land use planning on two separate tracks does not make sense.

The current draft comprehensive plan does not consider this crucial information, despite repeated urgings by the Methow Watershed Council, individual citizens, and environmental advocacy groups such as the Methow Valley Citizens’ Council. Failure to address this critical situation is reflected in the lack of population density considerations in the draft comprehensive plan – especially in the lower Methow.

Another important issue is whether the Planning Commission will recommend initiating a process empowering middle and lower Methow Valley citizens to develop their own up-to-date “More Completely Planned Areas” under the comprehensive plan. Upper Methow residents have already done this for their area. The proposed requirement that 50 percent of landowners must request such planning does not make sense.

The Planning Commission meets at 7 p.m. in the commissioners’ hearing room in Okanogan on July 22. Meet friends at the Methow Valley Senior Center at 6 p.m. to share rides and good company.

What may be an eyesore to some was an eye-opener for me June 4 as we left Twisp for Bellingham for my lymph node surgery. When I spied the pink water tower in the distance I did a double take, and then made the connection that the tank must have been painted pink for breast cancer awareness. Only later did I learn that Liberty Bell High School’s graduating seniors did the painting the night before.

I applaud them for sending an important message to women in the valley, and wonder who among them either lost a mother, grandmother, aunt, or family friend to breast cancer, were fearful they might, or watched a friend go through the fear a diagnosis of cancer brings to families.

I am grateful I moved to Twisp where a well-trained ARNP detected a lump that turned out to be suspect for cancer and required treatment. I will be okay, and will be a survivor. For those who have not had a well-woman exam, or been diligent in self-examination, the pink tower carries a powerful message. I think besides having excellent medical professionals in the valley we can be very proud these young people took the time to create an important reminder for our community rather than merely carrying out a frivolous prank to mark their 2013 graduation.

The county appears ready to adopt a comprehensive plan that will lead to more conflict over water in the Methow Valley and could force the state to step in to limit future development.

In a recent document addressed to the Planning Commission, the Methow Watershed Council warns that failure to plan for growth within the limits of our water resources could result in state-imposed development moratoriums on undeveloped lots – a measure that would lower property values.

Water has long been an issue in the county, but the situation is especially bad in the lower Methow Valley – from Twisp south to Pateros. Technical studies by hydro-geologists indicate there isn’t enough water in our aquifers to support future development on existing parcels. As it now stands, the owners of 1,092 out of a total of 2,913 lots will be unable to drill wells or build homes on their property. Even more alarming, if the lower Methow is subdivided to its full potential under current zoning, 24,313 unbuildable lots could be created.

In April 2011, the Watershed Council sent a letter to the county commissioners informing them of these and other findings, saying, “It is our belief that the comprehensive plan must be responsive to this data.” (This information, together with other studies done to implement the 2005 Methow Watershed Management Plan, is available on the Methow Watershed Council’s website.)

Unfortunately, after more than six years of effort and input from citizens and organizations like the Methow Watershed Council, the county’s latest draft of the comprehensive plan says little about water and is vague about how future growth will be managed. Most references to proposed densities have been removed, so we can only guess what the future zoning will look like.

We can solve our water problems, but it will require coordinating land use planning with water resource planning. We need to urge our county planners to work closely with the Methow Watershed Council. I hope to see more consideration of these issues at the next Planning Commission meeting on July 22 at 7 p.m. in Okanogan.

Thanks for road work

Last Thursday as I was driving down the West Chewuch Road, I spotted the [Okanogan County Electric Cooperative] crew that had been working on the road. I stopped to say “thank you” and I received some great smiles and appreciation!

The West Chewuch Road not only looks better, but is also safer, especially in the areas where the deer cross the road. Now we can see them better without the tall grass next to the road. Thank you!

Where are the values of the Liberty Bell High School class of 2013? (Letters to the Editor, July 10.)

It’s worth noting that the class of 2013 logged well over 1,000 hours of approved community service in the last five years. These hours were earned through service at The Cove food bank, 4-H, the Valley Teen Center, Kiwanis/Key Club functions, Methow Valley Elementary Lunch Buddies program, Liberty Bell sporting events, Winthrop ’49ers days, The Merc Playhouse, and much, much more. The class of 2013 also logged countless undocumented service hours that were spent helping needy youth in Africa, raising money for Methow Arts, the Public School Funding Alliance, cancer research at Relay For Life (among other events), as well as restoring damaged areas of the Okanogan National Forest, going on Church Youth Group mission trips, and much, much more.

The class of 2013 graduated a remarkable number of National Honor Society Members and scholar athletes, and the members of the class of 2013 combined for tens of thousands of dollars in university merit-based scholarships, not to mention stretching many local organizations to offer more in scholarship money than ever before due to the class of 2013’s dedication and abilities.

About 50 percent of the members of the class of 2013 are attending four-year universities, with about a dozen others at community colleges with high aspirations, and the rest ready to take on the world and the work force right now.

With all the truly damaging things we could have done for our senior prank, we decided instead to paint something pink. Not only that, but we painted something that is a tradition to paint. The fact that it does not blend in with its surroundings should not call into question the values of the class of 2013.

Where are the values of the class of 2013? The code name for our “prank” was Operation Breast Cancer Awareness. That ought to tell you.