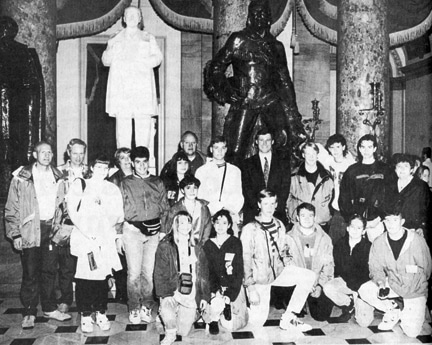 Twisp Plans Clean Up
The Twisp town council has proclaimed Friday, April 13 as Spring Clean Up Day. They hope all residents will take part in cleaning up their property so that it will present an appealing face to all who reside in the community.

Local Firemen Answer 13 Calls
Rural volunteer firemen from Carlton, Twisp, Winthrop and Mazama have had a hectic two weeks mostly due to “controlled burns” getting out of control. From March 28 through April 7 firemen were summoned to 13 fires. These volunteer firemen should be publicly commended for the time, effort and efficiency they expend on protecting the private property of everyone in the Methow Valley.

Stage Set for ’49er Sat. Night
There is a ring of hammers and saws in the air as Claude Yockey and his busy committee prepare the Winthrop Auditorium for the ’49er dance this Saturday. Mid-night oil is the rule rather than the exception for the Athletic Club Committee in charge of arrangements as the big dance date draws near. Yockey advises the doors will open at 8:00 p.m. when pop and juicy hamburgers will go on sale. No admission will be charged to youngsters under 12 years of age. The number of concessions and games was reduced this year to allow more space for the large dance crowd expected to begin bulging the hall when dancing gets under way at 10:00 p.m.

Grange to Hold Open House in New Building
The last two meetings of Twisp Valley Grange have been especially joyous affairs, as they were held in the large, beautiful upstairs hall. This new Grange hall is outstanding in the valley, it is modern and beautifully finished, 90×60, with a full basement and kitchen plus dining room and furnace room. So after several years of almost constant work by the members and help of other interested persons, it is now ready for use. At the last meeting the Grange members began plans for an open house in the near future. Please take advantage Mr. and Mrs. Public, neighbors and other Grange members and attend our open house.

Loop Loop Construction Resumed
D. H. Cadmus, representing the Bureau of Public roads, now building a section of the Loop Loop road up the Frazer creek section, returned Wednesday to resume supervision of the work. He was accompanied by two men, who will constitute the party. Contract for a four mile stretch of the highway connecting the Okanogan and Methow valleys, was let last year, and work just gotten well under way when inclement weather interfered with economical progress of the work. Construction and engineering supervision are now again under headway, and the work will be prosecuted to completion. It is understood a further contract on this road is now marked as all forest funds have for the time being, at least, been withdrawn.

Pateros Incorporates
E. R. Davis arrived the middle of the week with his fine new bunch of Jersey milch cows, taking them on to his ranch on Bear creek. This bunch of Jerseys, thirty-one in number, are among the finest stock ever brought into the valley. They were secured on Whidby island, Mr. Davis says, and he is highly pleased with his cows. Some trouble was experienced in getting the valuable consignment across the mountains, the train bearing them being delayed by a snow slide, the cattle being without feed or water for many hours.