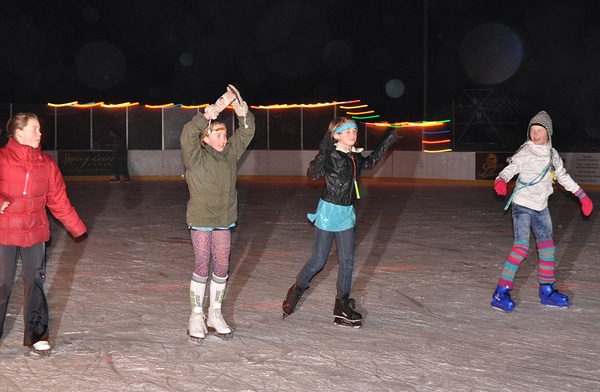 The Winthrop Ice Rink is one of three projects funded by the Washington State Legislature. File photo by Sue Misao

Three local projects, to the tune of $2.25 million, may now go forward thanks to the Washington State Legislature, which included funding for the 2013 Capital Construction Budget in its down-to-the-wire budget signed by Gov. Jay Inslee on Sunday (June 30).

All three public projects – Phase 2 of both Winthrop’s Susie Stephens Trail and ice rink, and the Department of Fish and Wildlife’s Methow Forest Restoration Project – get half or more of their funding through grants from the Washington Wildlife and Recreation Program (WWRP).

The town certified that it could fund its matching share of both its projects in May, but no other steps could reasonably be taken while the Legislature went into special session to hash out the budget that would fund the WWRP, Winthrop’s Town Planner Rocklynn Culp said.

“There had been so much uncertainty with the state budget that I honestly haven’t done much more work on Phase 2 of the trail,” Culp said.

Funding contracts should be sent out this week and approved by the end of July, Culp said. The town will then have a three-year window in which to complete work on its two projects.

“It’s important to note that both projects are following through on long-term visions this community has had,” Culp said. “We have heard from many different forums over the years that the community wants to see these projects happen.”

The Winthrop Ice and Sports Rink (WISR) board will take the lead on the ice rink upgrades, Culp said, researching refrigeration systems and securing the $375,000 in cash donations it certified it will be able to raise. The town will do the grant administration and support the project.

A major boost to raising those matching funds came to WISR recently thanks to a $100,000 bequest from the estate of Red McComb.

Ice rink upgrades will include a refrigerated slab and ice plant, a 1,200-square-foot building for public restrooms and changing area, sidewalks, landscaping and new signs.

The ice rink improvement project was one of three regional projects ranked in June as “projects of economic significance,” by the North Central Washington Economic Development District. The ranking qualifies WISR for letters of support and access to funding sources, according to Jennifer Korfiatis, development district administrator.

Phase 2 of the Susie Stephens Trail will complete the south end of the trail from Norfolk Road to a pedestrian crossing opposite the Virginian Motel, begin design and development of the downtown Riverwalk Trail, pave disabled parking spaces at the Town Trailhead, provide a water access point and complete landscaping and interpretive signs along the trail corridor.

The town will match the $365,000 WWRP grant through a combination of cash donations, donated equipment, labor and materials, and grant sources, Culp said.

A public meeting will be scheduled in the future to “give people an idea of what we want to achieve with both projects,” Culp said.

Phase 1 of the Department of Fish and Wildlife’s Methow Forest Restoration Project will receive a grant of $500,000 through the WWRP. The department will contribute $29,000 in matching funds. The project intends to thin and restore 3,604 acres of pine and aspen forest in the Methow Wildlife Area.