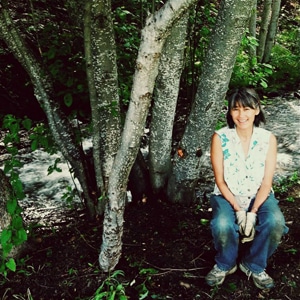 It was a freakier than normal week in Carlton with wildish weather, tiny fires, cop cars screaming up the road, people sleeping in the street and lots of fairies. It’s so hot that water droplets from the sprinkler evaporate before they have a chance to hit the ground, making watering a pointless, futile, endless pursuit. In addition to the vast swaths of people, summer brings an influx of insects to lawns and gardens, making watering a frantic, pointless and vicious battle. Unlike dogs, insects do not obey commands. I have never seen an insect’s ears so I have to conclude that they can’t hear. Meanwhile, thirsty flowers can’t believe all the drama involved.

The Carlton Store got these groovy new vertical signs made by the famous Winthrop musician/artist/cowboy T.R. Stewart. This one says “ice cream” of course, as you can plainly see, but there are two more that you’ll have to come down and read for yourself. It’s a surprise, but they probably won’t surprise you. Maybe you can get a good deal on that firewood during these days of swelter.