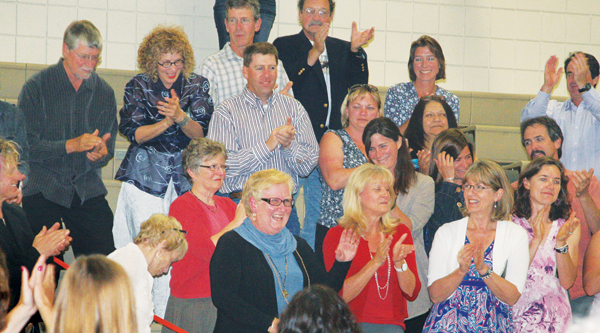 Retiring teacher Jane Orme, front row center, got a standing ovation from her colleagues, former students and the community at this year’s high school graduation ceremonies. Photo by Marcy Stamper

A standing ovation from the crowd in the Liberty Bell High School gym at graduation was probably the most fitting send-off for retiring teacher Jane Orme, who regularly put students on the stage in her 30 years of teaching English and drama in the Methow.

Orme started teaching in the Methow Valley School District in 1983, when she and Linda Reese were hired to share eighth-grade English and reading. Orme had taught high school English for 10 years in her native Alabama before getting the job in the Methow.

The biggest change in those three decades is lower enrollement (many grade levels have gone from four sections to one), meaning that she had a chance to teach and get to know virtually all the students, said Orme.

Orme has taught the children of former students and was pleased to teach with others who had once sat at desks in her classroom.

While she never acted herself, Orme had always liked drama (although, as a teacher, “I probably acted all the time,” she said).

After collaborating with the music teacher on holiday productions, Orme added a drama class for junior high students and a drama club for the high school, which continued throughout her career. It was gratifying to see the students grow – some majored in theater in college and now work in the field, she said.

Orme particularly enjoyed directing comedies and Shakespeare – among her favorite productions were Fools, a comic fable by Neil Simon, and Two Gentlemen of Verona with artist-in-residence Rod Molzahn this past year. In fact, the weightier dramas produced at the school were usually directed by students working with Orme on a senior project.

“Kids are really interested in books,” said Orme, dismissing the notion that no one reads anymore. Since the popularity of the Harry Potter series, students seem to be reading more complex books and high school kids often pick up light adult fiction, said Orme. “They are reading more challenging books – longer books seem to hold their interest.”

Orme devoted considerable effort to finding books that excite each student. Because kids have such different learning styles, some have embraced the eBook-readers Orme recently acquired for her class, although some prefer to stick with books on paper. Still others have gravitated to editions that present the complete text of Macbeth, for example, in the form of a graphic novel.

Orme is proud to have inaugurated “Me, Myself and I,” a year-long autobiography assignment for seventh graders. The project, which she started early in her career, includes interviews and research into family trees and is still an annual assignment.

Today, some kids whose parents had done autobiographies (written long-hand) are now telling their own stories, often accompanied by a video component, said Orme.

Orme has few solid plans for her retirement. She will take a relaxed trip to visit with friends and family in Mobile, Ala., as well as a trip to the Bay Area to see her two sons.

“Maybe it’s a cliché – a lot of people say this about retirement – that some want to see what it’s like not to have to do anything,” said Orme.

“School interrupted family time, but the school has been my family, too. There is incredible support here, especially this past year,” said Orme. Her husband, Earl, died in March.

“I’ve felt really honored by people celebrating my retirement with me,” said Orme. “This is the best place in the world to work – this is a fantastic district, from the administrators all the way down. It’s not the easiest thing to think I’m not going to be doing that anymore, but I’m so glad I had the opportunity.”

Another difficulty is cleaning out her classroom, which she was still tackling two weeks after the term ended. “And I will probably be at the school as a sub,” she said.

The school board will recognize Orme for her service at its meeting on Wednesday (June 26).