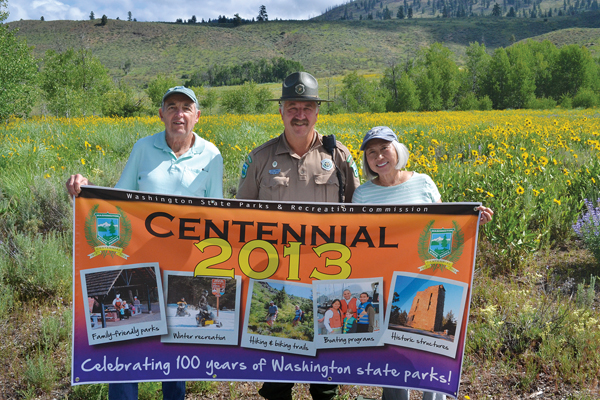 In honor of the 100th birthday of Washington State Parks this year, the state’s Parks and Recreation Commission teamed up with the Washington State Geocaching Association to create the Centennial GeoTour.

The Centennial GeoTour features 100 geocaches hidden in 100 state parks across Washington. Participants will travel around the state with a “passport,” searching for hidden geocaches in the parks, and stamping a box for each cache they find.

Geocaches are hidden containers stashed around the world with their GPS (Global Positioning System) coordinates registered on a public website (www.geocaching.com).

Geocaching is a relatively new activity that arose with early GPS enthusiasts as soon as the technology became publicly available in the year 2000, according to Geocaching.com.

“Geocaching is a real-world, outdoor treasure hunting game using GPS-enabled devices. Participants navigate to a specific set of GPS coordinates and then attempt to find the geocache [container] hidden at that location,” according to the site.

GeoTours feature a series of caches within a particular geographic area and take cachers on a tour around unique locations such as Minnesota’s Paul Bunyan Trail, the Chesapeake National Historic Trail, and the Cateran Trail in Perthshire, Scotland.

Each cache in the Washington State Parks Centennial GeoTour was placed by an active member of the local geocaching community and approved by a ranger at each park. Winthrop residents and avid geocachers Koko and Al Blakeslee, whose geocaching handle is “Barnabirdy(s),” are responsible for hiding and maintaining the GeoTour caches at Pearrygin Lake and Alta Lake state parks.

The Blakeslees, who have placed around 50 caches since they started geocaching 11 years ago, are known for choosing “harder locations than some,” Koko said. “We like to put them in beautiful places, or places where people are less likely to go,” she added.

Pearrygin Lake State Park ranger Rick Lewis said that the GeoTour cache at Pearrygin is in an “easy-to-find location,” and reminds players that it is only one of five approved geocaches within the park. And for enthusiasts, there are other “hidden little treasures,” all around the valley, he said.

Al Blakeslee estimates there are 40 to 50 approved geocaches just within the Methow Valley, and 29,690 around the state.

Geocaches are rated by difficulty of terrain and how hard they are to find, said Koko. She knows of one atop Liberty Bell Spire, “which no one has found yet,” one in Lake Chelan that requires SCUBA diving to access, and one placed along a Methow Valley ski trail that she and Al “disable” when the snow is gone and “enable” each year when the trail is ski-able again.

The Blakeslees have found at least one cache in each of the 50 states and have geocached as far away as China. Together, they have found almost 12,000 caches, Al said.

Although the thrill of geocaching is in the hunt as well as what’s inside the cache, the Washington State Parks Centennial GeoTour includes several incentives to encourage players to keep finding more caches.

First, each cache contains a unique ink stamp to verify the player’s visit to the site. Second, once a player has collected 50 unique stamps, they mail in their passport to collect a silver geocoin. When the second 50 stamps are collected, a gold geocoin is received.

The Centennial GeoTour is expected to continue through 2015 or until all coins are distributed, according to Washington State Parks. Individual caches may remain in place much longer to guide people to places of natural beauty and history around the state.

Centennial GeoTour players can download the GeoTour passport, map and guidelines at www.parks.wa.gov/geocaching/. Visitors to Washington state parks are reminded that a Discover Pass must be displayed on all vehicles when visiting state recreation lands.