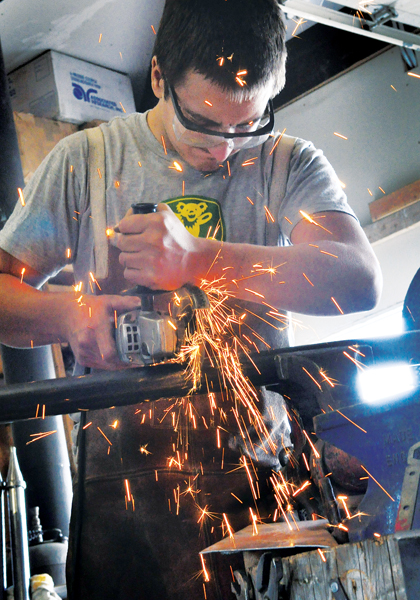 Jachin Anderson worked on the components for artsy metal composting barrels as part of his geometry class, finishing up the project just after he graduated from the ILC. Photo by Sue Misao

The senior Geometry Design/Build class at the ILC took on the challenge from textile artist Sara Ashford, who is starting a garden to grow plants for natural dyes. Students worked with Ashford and with metalworker Jerry Merz, who taught them to weld, cut metal with blowtorches and to grind steel. Merz also helped them refine their model so that the barrels would be balanced and practical.

The students started the term brainstorming personal inventions, including a climbing wall and a bedside table, but soon shifted to a project they could build for someone in the community. They teamed up with Ashford from Culler Studio as the client and Merz from Methow Metalworks as a mentor, said ILC math instructor Kim Odell.

Although initially disappointed they couldn’t build their original projects, they were enthused by designing the compost bins and seeing them take shape, said Odell. One student, Jachin Anderson, even showed up the morning after he graduated to help finish handles for the barrels and to mount them on metal stands.

The early plan was more traditional – square, wooden boxes that would sit on the ground – but the students realized wood would decompose and they thought shoveling compost up and out of them would be cumbersome. Plus, the boxes were boring, and the students wanted to meet Ashford’s desire for something with an artistic flair.

Jake Davie came up with the idea of barrels, and the class together figured out a way for Ashford to turn them easily.

“Everyone knows that with compost, you need to give it a good turn every couple of months to get the full effect, or it gets wet and slimy,” said Anderson.

The design evolved as they realized the barrels needed air holes and interior baffles to catch and move the compost. They are mounted high enough that Ashford can fit a wheelbarrow beneath and easily shovel compost into it.

“This gets their minds loosened up and creative. The book is just circles, triangles and parallelograms,” said Odell.

One student calculated the angles that would make the barrels balance, while others did measurements for a latched door. The students also had to learn to take the project from two to three dimensions.

“This is putting book knowledge into real life, gaining a skill and connecting with a mentor,” said Odell. The students honed their group dynamics by listening to one another’s ideas and offering suggestions for how they might improve on them. “They learned to trust the process and to give constructive criticism,” said Odell.

They used mostly recycled materials but worked with Merz and Ashford on a supply list and budget to purchase metal for the stands, said Odell. They also learned that it is typical to adapt designs to suit a client’s needs.

Most students had little or no experience with metal work. “Welding is pretty fun, although I wouldn’t want to do it a lot. I always feel like I’m about to light myself on fire,” said Davie, who had never welded before this class.

Ashford will use the barrels to decompose leftover plant material from madder, marigold, chamomile, indigo, coreopsis and rabbitbrush in the garden next to her studio at TwispWorks.

“There’s a whole alchemy behind making long-lasting dyes,” she said.