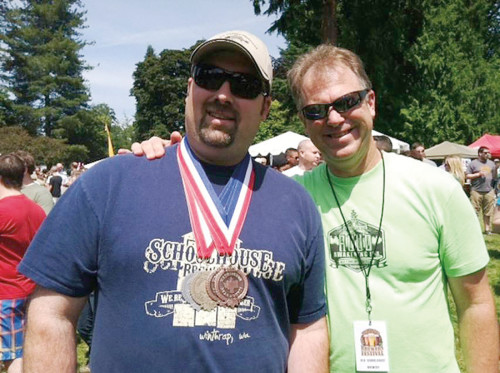 The Old Schoolhouse Brewery in Winthrop was named Small Brewery of the Year at last weekend’s Washington Brewer’s Festival. The event, sponsored by the Washington Beer Commission and held over three days at Marymoor Park in Redmond, featured more than 250 different beers offered by 74 Washington state breweries. It was the first time the organization bestowed Washington beer awards.

In addition, Old Schoolhouse won bronze medals for its Imperial IPA and Imperial Stout, a silver medal for its Hooligan Stout, and a gold medal for its Ruud Awakening IPA.  Beers were judged in several different style categories in a blind tasting. The small brewery category is fewer than 1,200 barrels produced per year.

“It was an amazing Father’s Day,” said brewery co-owner Casey Ruud, who was there with his sons, Blaze and Evan, brew masters for Old Schoolhouse. “It’s the one that everyone in Washington would want to win. To beat everybody with our simple system is pretty amazing.”

In other news, the brewery has hired Stuart Holm, former owner of the Boulder Creek Deli, to be its kitchen manager.