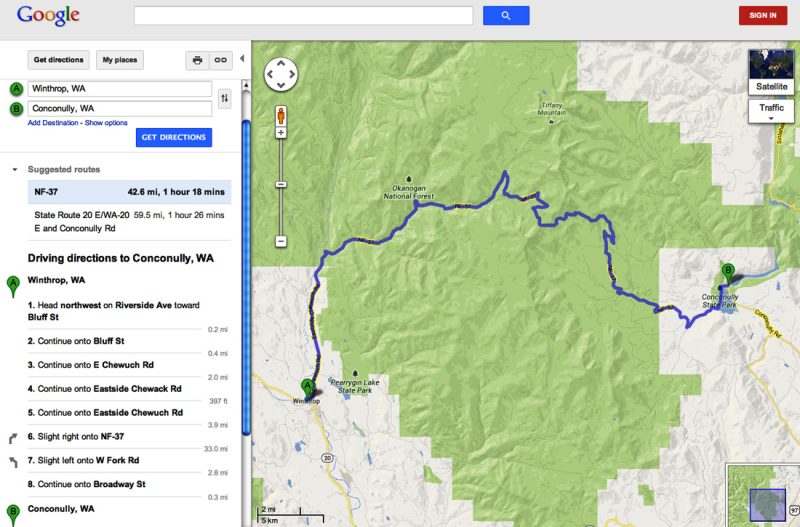 Google Maps sends travelers via Forest Service roads as the first option to get from Winthrop to Conconully, although those starting in Twisp are directed to take highways.

Increasing reliance on web-based maps and smartphone apps means conveniences and risks – some serious – for people unfamiliar with local roads.

Two women in their 60s from Seattle spent two harrowing nights in their van at the end of May, stuck in the snow after following directions on Google Maps from Winthrop to Conconully that took them via Boulder Creek and other U.S. Forest Service roads.

Although their experience was frightening and potentially life-threatening, Jan Bristow and Janet Crumley were fortunate – they had cheese and crackers, drinks and blankets in the van and were rescued on the third day when Crumley hiked out and was found by a local woodcutter. Crumley suffered minor frostbite on a finger and toe and was very sore for days, but they were otherwise in good condition.

After traveling to the Methow from Seattle via the North Cascades Highway on Tuesday, May 28, they stopped for lunch in Winthrop and consulted Google Maps on an iPad for directions to Conconully. They set out via the first route that came up – 43 miles over Forest Service Road 37, which climbs considerably before dropping down to Conconully. Bristow said the app did not list any other options, so they figured this was the only route, they said in an interview last week.

Asking Google Maps for directions to Conconully from Winthrop brings up the Forest Service roads as the first option, with the alternate route, via highways 20 and 97, listed below in a link that has to be clicked. Google sends travelers starting in Twisp on the highways. Yahoo! Maps and MapQuest send all travelers via the highways, whether their starting point is Winthrop or Twisp.

While Crumley recalled having gone through Okanogan on a previous trip to Conconully, they followed the online directions for what they expected would be a casual day trip. After driving about an hour on dry roads in warm, sunny weather, they encountered deep snow as the road climbed. Crumley said 3 feet of snow appeared suddenly after a curve and that she would have had to slam on the brakes to stop in time.

“We encountered snow that was deep enough to bog down the car immediately,” they said in a letter describing their ordeal, which was sent to the Methow Valley News, the U.S. Forest Service, and Gov. Jay Inslee.

Because Bristow uses a wheelchair and the van had been adapted to accommodate a ramp, its clearance was even lower than normal. Crumley spent two days attempting to dig out the van using branches and a pot, but each effort to move the van brought it closer to a steep drop-off at the edge of the road, they said. After clearing the snow from around the van late Wednesday, they planned to try to drive out Thursday morning, but they got four inches of new snow Wednesday night.

In desperation, Crumley, who has arthritis and had recently had a knee replacement, hiked out on Thursday to get help. After walking for more than six hours and about 15 miles, she collapsed on the road, unable to go on, she said. A local woodcutter found her and took her to his house, where they called 911 and a tow truck before heading back to where Bristow was waiting in the van. They also called Aero Methow Rescue Service since Crumley, a registered nurse, was concerned about Bristow, who was nauseated and chilled.

Aero Methow sent two four-wheel-drive Suburbans equipped with stretchers that can ferry patients to an ambulance, according to Executive Director Cindy Button. Bristow was transported by ambulance and both women were well enough to spend the night in a hotel in Winthrop. They finally visited Conconully (via the highways) on Friday and spent one more night in Winthrop before heading back to Seattle.

Bristow and Crumley want the Forest Service to post signs stating that the road is closed to avert a similarly precarious situation for others. “My feeling is – No. 1 – that Google should not be putting logging back roads as part of their mapping system. County, state and federal agencies should have put up a ‘road closed’ sign,” said Bristow. “I could have died up there, and so could Janet. If somebody got hurt, they’re not going to be able to walk out and get help.”

The Forest Service has thousands miles of roads and personnel have no way to physically go out and sign all roads as open or closed, nor to check whether conditions have changed, said Robin DeMario, a public affairs specialist with the Okanogan-Wenatchee National Forest.

“Google Maps is a wonderful product, but for the best information for anyone traveling in the forest, we always recommend they contact the nearest Forest Service office to talk with someone who knows the area and can give them advice on the current conditions,” said DeMario.

Each year the Methow Valley Sport Trails Association extricates a couple of cars that have turned onto its groomed ski trails after being misdirected by GPS (global positioning system) navigation. Another half-dozen end up in a similar fix but manage to get themselves out, said James DeSalvo, MVSTA’s executive director.

MVSTA uses a snowcat to pull out people who have sometimes driven as much as one-quarter mile before becoming stuck, said DeSalvo. “We want people’s experience in the valley, whether they’re using the trails or not, to be good,” he said. By pulling people out themselves, MVSTA is also able to preserve the trail platform, he said.

DeSalvo said the problems with wayward vehicles tend to occur at the same few spots where trails cross roads – on Wolf Creek Road and Twin Lakes Road near Winthrop and near the Freestone Inn in Mazama. This past winter they bermed the road crossings, which has helped, he said.

DeSalvo said that while he always asks what device or app people were using and contacts the company to report a problem, the issues are not necessarily resolved, since they end up rescuing others using the same software.

Because the market is so competitive, DeSalvo speculated that creators of apps do not necessarily share information about inaccurate roads or directions. “It’s a learning curve with these apps – they’re just not quite there yet – and with the people using them,” he said.

Google built the base map it uses from a wide range of sources, among them government agencies including the Forest Service and commercial providers, according to a Google spokesperson.

“We take a wide range of factors into account in order to deliver the best possible driving route,” explained the spokesperson by e-mail. “We look at things like road size, how direct the route is, and estimated travel time. You are able to easily customize your own route.” She said their Maps team reviews and resolves reported problems, generally within 48 hours.

Aero Methow has not noted an increase in the volume of calls they receive from people waylaid by computerized mapping software, although they hear anecdotal reports about people who have been misdirected but gotten themselves out, said Button.

Aero Methow goes out an average of once a year to assist people who have activated the wrong button on preprogrammed devices that have one button to call for help and another to reassure friends someone is merely delayed, said Button.

But these devices – which enable emergency medical technicians to pinpoint people’s location in the wilderness – have saved lives and may have helped reduce the calls they get about overdue hikers, said Button.

Still, Button said they always tell people that they need to know where they are, with a reference point at all times, as well as food, water and a gas can. “They should have a compass and a map and not rely on electronics,” she said.

“Don’t push it – turn around,” said the Forest Service’s DeMario. “You already know what the conditions are behind you.”