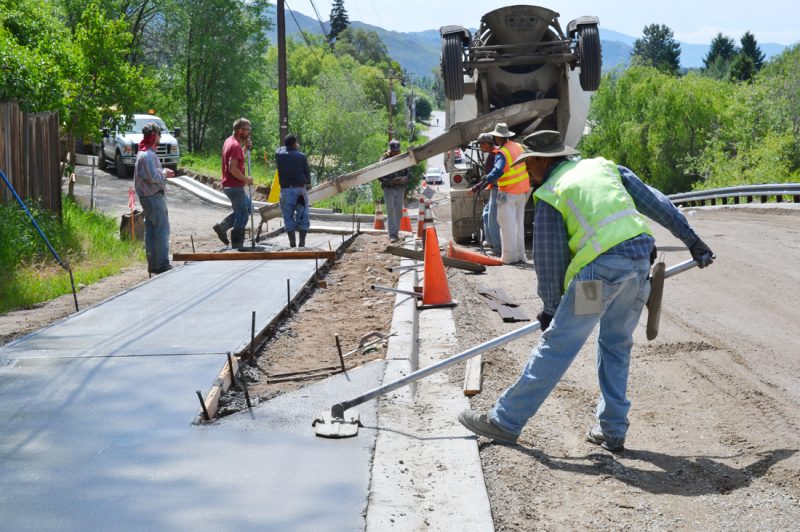 After pouring the sidewalks on Monday and Tuesday (June 10-11), the plan was to pave the street today (June 12). That will be followed by smaller “clean-up” jobs to finish the sidewalk/curb interface, revegetate disturbed areas, place manhole covers and stripe the new asphalt, Lloyd said.

Castle Avenue residents will have a nicer street, but they’ll be happy to see the project done.

Property owners adjoining the project expressed a litany of complaints during construction, ranging from road grade changes to current and future driveway access to removal of trees to sidewalk maintenance, but according to Public Works Superintendent Richard Karro, “the complaints were fairly typical.”

“When the public good is the primary goal, road improvements are not always in tune with what adjoining property owners might want,” Karro said. “And some people simply didn’t want the road improved at all.”

Widening the road meant using all 60 feet of public right of way along what Karro once termed “a cow path” – an uneven, potholed surface with a grade around 14 percent in spots, exceeding today’s maximum allowable 12-percent grade, according to project engineer Dave Allen of SCJ Alliance.

Flattening the grade to meet design standards while still getting over the new Fulton Ditch culvert required raising the road elevation, most visibly near the bottom of the slope, Allen said. “There were a few complications from a design standpoint,” which necessitated starting the uphill grading higher up on Castle Avenue than they had anticipated, he said.

Curb cuts were made to allow for future driveway access to several adjacent property owners who have not had physical access onto Castle, Karro said. “We adapted almost all of the driveway issues,” although widening the roadway resulted in steeper grades going into several properties, he said.

Uri Silberstein, who owns two 50-foot-wide lots fronting Castle Avenue, said the original plan was to provide him with no access off the street. “I was surprised that I was the one who had to request a curb cut. It seems that the town would normally come to work with property owners when it’s seizing property,” he said.

Silberstein was in California in late March when he learned about the road project via a phone call from his neighbor Mike Strulic. “I never got any notice in writing or by phone from the town that a project was going forward that would directly affect my property access and property value,” Silberstein said.

Three mature trees within the right of way had to be removed in front of the home of Joe and Diane Costales after sustaining root damage during pavement cutting. “I don’t like cutting trees either,” said Karro, “but they were not going to make it.”

“Sidewalk maintenance is going to be a hot potato,” said Karro, noting that it is common practice for adjoining property owners to clear the snow from sidewalks downtown. “In this case, portions of the sidewalk currently go from nowhere to nowhere, though we are planning to connect them with future sidewalks one of these days,” he said.

Until that happens, the town won’t enforce clearing Castle Avenue sidewalks, Karro said. “For the moment we’ll treat it like there isn’t a sidewalk in winter,” he said.

Winthrop’s second street improvement project planned for this summer is on Bluff Street, proceeding from Bridge Street where the existing curb ends to the town limits where it becomes East Chewuch Road. Depending on the results of state budgets talks regarding the Public Works Trust Fund, “the best case scenario” would see the project go to bid in mid-July and begin construction this year, said Karro.

The town has secured Transportation Improvement Board funds for Bluff Street road work, but is depending on uncertain Public Works Trust Fund monies to replace troublesome water lines along the route. Engineering for Bluff Street is being done by SCJ Alliance and is funded by the town’s water reserve account, Karro said.

“Bluff will be more straightforward than Castle,” said project engineer Allen. “It’s not as steep and there’s no culvert to work around.”

If work proceeds this summer, Karro anticipates construction to happen one lane at a time with flaggers to control traffic going in and out of town from East Chewuch Road.

Blueprints for the Bluff Street project should be available at Winthrop Town Hall this week, according to Allen. Property owners with questions about the project should contact Karro at (509) 341-4130 or Allen at (509) 630-0107.