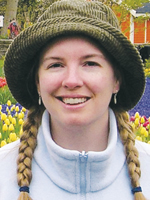 Mother Nature canceled our hiking plans with friends on Sunday, so instead we watched the snow fall and drank exotic tea that Mark and Ruth Hoffman collected from their world travels.

“Wow. This is different, it tastes smoky,” I said.

“That’s because they cure the tea leaves over fires made from yak dung,” I was told.

Long pause as I stare into my cup. “I’m gonna need more cream and honey,” I concluded.

In the dark hours of the previous night, I awoke to the sounds of a heavy rain. I was happy for the awakening, as a pesky dream of numbers that would not fit neatly into spreadsheets chased me. Normal people dream about rabid tigers chasing them. My nightmares consist of irritable numbers, with faces and legs.

I slowly ticked off everything we did outside that day, wondering if I left anything laying around that would warrant me leaving my warm bed to go rescue it from pelting raindrops.

The day before was beautiful blue sky with a light breeze – it felt like spring. I picked up a box of bees from Dave Sabold that morning. When I lifted the box from the back of the truck and carried it to the back of the garden, to the waiting hive, I could feel the humming vibration of 15,000 little bodies through the waxed cardboard.

The queen was in a tiny wooden box with a mesh screen on one side and a wad of candy blocking a hole on the end. The worker bees and the queen make introductions through the screen while the workers eat the candy over the course of several days to free her. It’s just one tiny little window into the secret lives of bees.

My thoughts drifted to Arno Penzias and Robert Wilson who, in 1964, observed an intense static buzz emitted from their highly sensitive receiver. They initially thought it was noisy New Yorkers. Through a process of elimination, they discovered the static was leftover noise from the Big Bang. Their discovery of the birth howl of the universe brought them the Nobel Prize in Physics in 1978.

Holding a box of bees is kind of like holding the sound of the universe in your hands. It’s a little awe-inspiring, a little frightening, and a reminder of the fragility of life.

When I lift each frame of a working hive, I feel like I’m observing a secret that is just on the tip of tongue, just at the edge of consciousness – an answer that you might catch a fleeting glimpse of in a moment between deep sleep and wakefulness.

Or, I’m just holding a frame of angry insects that could easily swarm and kill me at any moment, if they chose to do so.

With that thought I quickly slid the last frame into place, checked the level of sugar syrup, placed a pollen patty on top and replaced the lid before making a quick retreat.

You can hear the song of bees if you lay down in a field of flowers on a sunny day. And you can listen to the music of the universe, as recorded by NASA spacecraft, at http://www.nasa.gov/mission_pages/cassini/multimedia/pia07966.html.