There’s a note on the Carlton Post Office door apologizing for the state of the flower garden. It’s true we have been spoiled by having such flowerful landscaping to tiptoe through on the path to our junk mail. According to the note, this will be solved as soon as the new gardener shows up. Meanwhile, enjoy knowing you are not the only one with overwhelming yard work piling up along with your junk mail.

Does the world truly need packrats? I’m asking for a friend. Because I seriously want to kill mine. I mean my friend does.

Meanwhile, this weekend the good people of Carlton were out enjoying the weather by getting all sweaty and dirty or sunburned. I don’t know what the bad people were doing. The creeks are rising and boy are they noisy. This is the time of year people have to talk really loud. You can’t shush a creek. 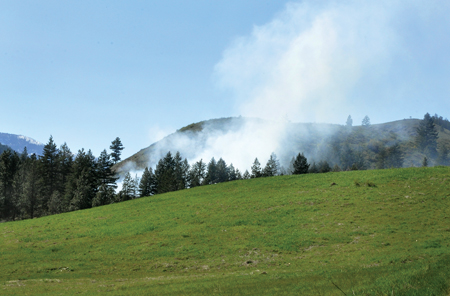 Also, Libby Creek had its second wildland fire of the season already, probably caused by a rogue spark that wasn’t satisfied being stuck in a confined space next to a bunch of boringly obedient fellow sparks. Some folks just don’t like to be controlled. Once again our trusty firefighters came to the rescue and fixed the problem. Here is a “where there’s smoke” picture during the fire’s early stages. If you’re my neighbor and this  looks jarringly familiar, as if it was shot from your house when you weren’t home, well.