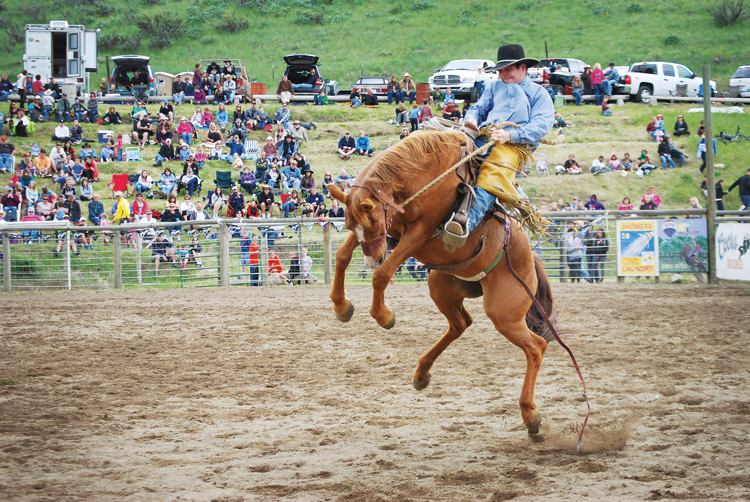 The 42nd annual Methow Valley Memorial Day Rodeo enjoyed a wildly successful weekend Saturday and Sunday (May 25-26) and the only things that got broken happened in the right places – gate receipts and attendance.

Record crowds turned out both days at the Twin Lakes rodeo grounds to see the rough stock and contestants go hoof-to-toe in the yearly show organized by the Methow Valley Horseman (MVH).

Roger Hammer, president of MVH, which also puts on the annual Labor Day Rodeo, said he could not put his finger on any single reason for the higher-than-usual holiday turnout.

A full roster of events including junior rodeo, ranch rodeo bronc riding and the ever-popular mutton bustin’ for the little tykes, may have had something to do with attracting the large number of spectators.

One-time Twisp resident Larry Campbell, now owner of Campbell’s Auction in Okanogan, served as announcer and kept the events running smoothly and at a fast tempo. A new donated sound system operated by Chris Wright (from the west side) kept the crowd entertained with music between and during events.

The only local riders in the rough stock events included bull and bronc rider Aaron Hammer of Twisp, who won Saturday’s bull riding in spite of a cast on a broken left arm he sustained at the Wenatchee rodeo May 4.

“Aaron rides bulls with his right hand and broncs with his left,” explained Roger Hammer. “He couldn’t handle the strain from the buck rein on his left arm but was good to go on bulls.” Hammer was in Coulee City the day before the local rodeo and was back competing in Coulee City on Sunday.

Shane Coleman, a 2012 graduate of Liberty Bell High School, was in Sunday’s lineup of bull riders but was unable to stay aboard Walkabout, the mount he drew from the pool of C & C rodeo animals provided by long-time stock contractor Red Clark.

The Tough Enough Equestrian Drill Team from Colville, which made its first Methow appearance at the Labor Day rodeo last year, again performed its precision horseback choreography several times during the weekend.