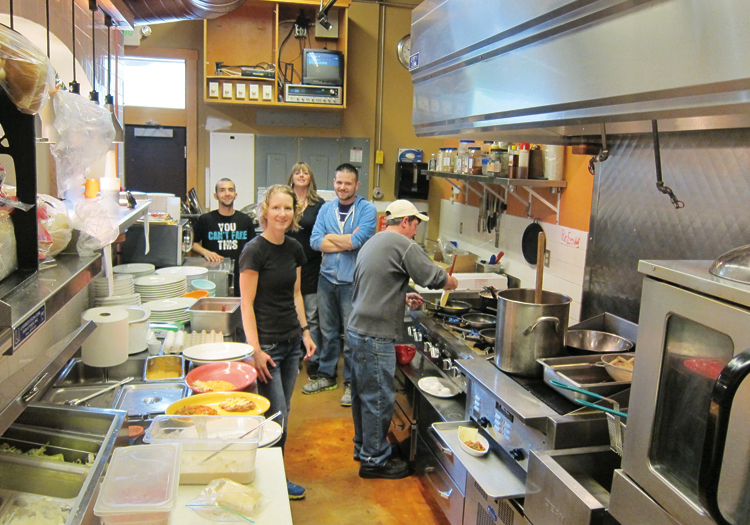 The Blackbirds building on Highway 20 in Twisp, which had been moribund for several years until a new restaurant opened there last January, is once again going through some changes.

The restaurant, Dos Amigos, has been rechristened Blackbirds Cafe. In addition to the new name, there is a new staff, new hours, new menu – and a barber shop.

James Stutheit, who has operated Mr. J’s Barber Shop since December 2011 at a building off of Highway 20 at Second Avenue in Twisp, is relocating his business to the Blackbirds building, and will begin seeing customers this week in a remodeled space.

Stutheit is also the bar manager for the Blackbirds Cafe, which only recently changed its name and added dinner hours to its breakfast-and-lunch schedule.

Mitch McKinney, who managed Dos Amigos, is still aboard, working “both the back and the front of the house” and doing some cooking, he said. But former chef Franky Mendoza left earlier to attend to family matters in Mexico and is no longer part of the operation. Derik Curley is handing other general management duties.

Stutheit, who bartended in Spokane for about two and a half years, said the cafe hopes to attract events to the site’s outdoor stage.

The cafe’s hours are 7:30 a.m.-2:30 p.m. Wednesday through Monday. On Friday, Saturday and Sunday, a 5-9 p.m. dinner service has been added. Dinner will feature special entrees but diners can also choose from the lunch menu. Beer and wine are available. The phone number is 997-5001.

The Blackbirds building is still owned by Craig Bunney. A potential deal to sell the site was reached in mid-2012, but that fell through.