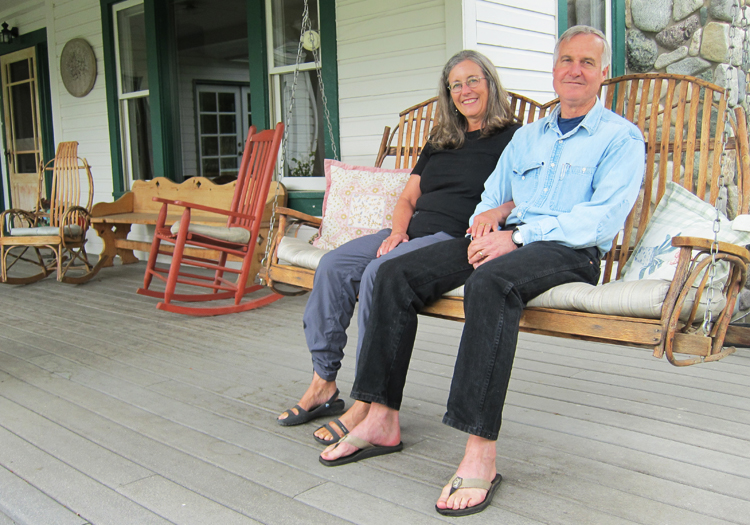 Terry Larson wants his friends and customers to know: He still loves the Methow Valley Inn and cherishes the community’s longtime support. But it’s time for him to move on.

Larson and his co-owners, the husband-and-wife team of Raleigh Bowden and Peter Morgan, this week listed the venerable bed and breakfast through Coldwell Banker Winthrop Realty broker Dave Thomsen at a price of $1.1 million.

The inn, which started life as a hotel in 1923 and went through many modifications over the decades, features eight guest rooms, a commercial kitchen and spacious grounds with extensive landscaping. Its location just off Glover Street in Twisp is convenient to downtown attractions such as The Merc Playhouse and Confluence Gallery & Art Center.

The decision to sell was mostly driven by Larson, who has owned or co-owned the inn for 18 years and recently turned 70. Larson, Bowden and Morgan considered selling a half-interest in the business, but Thomsen advised them that the inn would probably sell more quickly as a complete purchase.

Not that anyone is in a big hurry. The three owners say they are willing to be patient to find the right buyer – someone who is committed to investing in the business and the community. Morgan said the ideal buyer might be a couple with a combination of skills and experiences, such as marketing, cooking, maintenance and dealing with the public.

Larson and his wife, Melissa, bought the Methow Valley Inn in 1995, during what Larson calls his “first retirement” from a career in electronic engineering that included a decade in Europe. As for the building’s condition, “it was still standing,” Larson says, but otherwise in poor repair. The Larsons spent the next two-and-a-half years renovating, with the help of local contractors including Sam Sanford, Mark Monteverde, John Sorg and Dave Christenson.

Larson credits Melissa for the “vision” behind the restoration, an idea that started with drawings on a napkin while the couple were contemplating buying the inn. The fourth floor, which had burned during the 1960s, was rebuilt and the original 1923 roofline was restored. A new fireplace and a 42-foot chimney were added.

The Larsons operated the inn with the assistance of their daughter, Leah Kominak, for several years. (Leah and her husband, Gary, subsequently purchased the old creamery building across the street from the inn and with Aaron Studen started the first Twisp River Brew Pub. That building was destroyed by fire in 2003; the Kominaks still own the property.)

Eventually, Melissa became a “full-time grandmother,” Larson said, and he took over running the inn until Bowden and Morgan became partners in 2010. The Larsons divorced several years ago but remain close, Terry Larson said.

Bowden and Morgan had built a house on Balky Hill with the intent of retiring, but bought a half-interest in the inn about three and a half years ago after being approached by Larson.

Bowden and Morgan had been staying at the inn for years, and had become friends with Larson. “We talked for about a year” before closing the deal, Larson said.

Larson describes Morgan as the business and finance manager, and Bowden as the “chief chef” and marketer. Larson is still the friendly greeter when guests arrive.

“We get along famously well,” Morgan said of the partnership. “Working with Terry has exceeded our wildest dreams. We pinch ourselves all the time.”

“We have had a magical three and a half years,” Larson said in an interview from New Mexico, where he is vacationing. “It’s a great business and a wonderful lifestyle. And it’s a way of being part of the community that you can’t do any other way.”

“We fell in love with Terry and with the inn [as visitors],” Morgan said. “We were sad when we saw it for sale. We didn’t expect to be buyers. We were hoping someone would carry on as Terry had.”

That “someone” turned out to be Morgan and Bowden.

“It was a gem that had not been promoted very well,” Morgan said. “We felt we could bring some things to the partnership that would be helpful, that we could build the business over time and make it more viable.”

That has mostly happened, Morgan said, although the partners haven’t yet hit all the goals they developed in a five-year growth plan. All the elements are in place for a new owner to keep building on the inn’s success, he said.

Larson said he has appreciated what he called “the renaissance of Twisp” during his ownership of the inn. “It has been fun to see our end of the valley develop its own personality and attractiveness,” he said.

“The inn serves an important role in our community, a piece of history preserved, a place available for community events and a business employing people and bringing visitors to our beautiful valley who contribute to our economy,” Larson said.

That role is important to the sellers.

“We want to do this right, and find the right buyer,” Morgan said. Morgan added that he and Bowden haven’t ruled out buying Larson’s half or taking on a different partner.

“It’s an amazing opportunity for the right buyer,” Morgan said. “But you should have no illusions about what’s involved. You have to be a ‘people person’ and be very welcoming.”

Morgan emphasized the inn’s relationship with the community as key to its success.

“People care deeply about it,” he said. “It’s very humbling. It makes you realize your responsibility to the community.”

Morgan said he and Bowden haven’t thought much about what they might do if the inn sells. But both are heavily involved in other community activities, he noted. “We certainly won’t be bored,” he said.

Larson said selling the inn will be a sad moment, but necessary for him.

“It’s time for my second retirement,” he said.