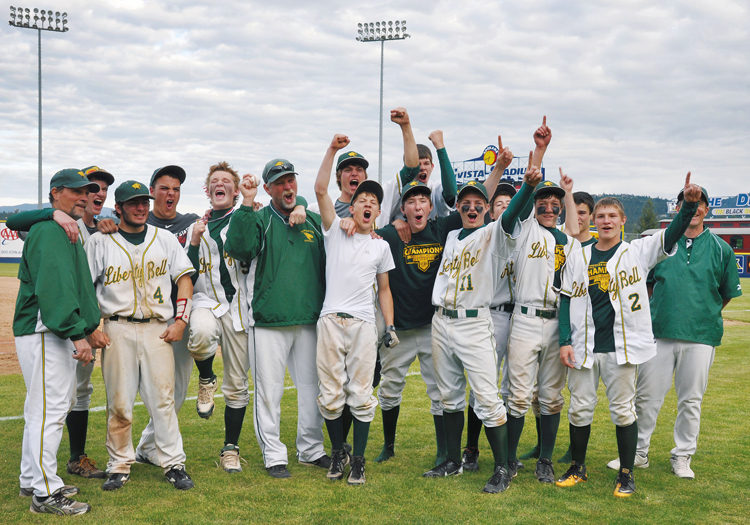 It’s a huge week – an historic week, in fact – for state-bound Liberty Bell High School. For the first time in school history the Mountain Lions are sending four varsity teams – baseball, softball, track and tennis – to state competition at various venues in Eastern Washington this weekend.

On the strength of record-setting track and field performances, an all-time high of 16 athletes competing in 19 events will represent Liberty Bell at Eastern Washington University in Cheney.

Twenty straight wins wrapped up with heart-stopping playoff victories have landed a young baseball team in the state final four against DeSales at Ellensburg. No Liberty Bell baseball team has made it this far before, and all but one of these players are juniors or younger.

The varsity baseball boys stopped Lind-Ritzville-Sprague, 6-4, and turned back Asotin, 9-8, at Spokane’s Avista Stadium last Saturday (May 18) and still displayed their flair for dramatic endings in both games.

Derek Alumbaugh started on the mound for the Mountain Lions in order to save Andrew Ryan for game two should Liberty Bell prove victorious.

The Mountain Lions took advantage of a couple of early Lind-Ritzville-Sprague errors to score three runs in the first inning and take a 3-0 lead. In the second inning, consecutive singles by Alumbaugh, Cole Darwood and Morgan Palm scored a fourth run.

In the fourth inning, center fielder Palm made a “spectacular running over-the-shoulder Willy Mays catch of the hardest-hit ball of the day,” coach Don Calvert said.

It allowed Liberty Bell to make a double play as a Bulldog base runner headed toward home in the belief that Palm would not make the catch. That play, plus the game-ending shoestring catch by David Dinsmore III at first base that made KXLY-TV’s sports highlight reel, stranded two Bulldog players – the tying runs – on second and third base.

Asotin spoiled Liberty Bell’s only other trip to state in 2009 with a 10-1 victory over the Mountain Lions.

“They came into this game thinking we would be no contest,” Calvert said. “When we got up 5-1 on them, they were wondering what happened.”

The Panthers didn’t roll over, however.

Kurtz and Riley Calvert scored in the top of the sixth inning to again put Liberty Bell on top, 8-6. In the bottom of the sixth, Asotin tied the game.

After throwing 100-plus pitches, Ryan was relieved by Chip Jones in the fifth inning and with the game knotted 8-8, Dinsmore was called to the mound to close out the game. He struck out the first batter, walked the second and the third flew out to Palm for two outs.

The next batter singled, another walked and Asotin had the bases loaded in a tie game with runners in scoring position and a three-ball, one-strike count on the batter.

“I wasn’t nervous,” Dinsmore said. “I was confident in my back-up.”

“The next two pitches would either produce a strike-out, a walk or a base hit that would score two runs,” Calvert said.

On the next pitch the batter hit a hard line drive up the middle that appeared it would get through the infield.

Ryan, now playing shortstop, made a diving stop and, from knees and bloody elbows, flipped the ball to Calvert covering second for the game-ending out.

Then all was pandemonium.

Game sportsmanship awards were given to Alumbaugh for game one and Riley Calvert for game two.

The Mountain Lions will play perennial powerhouse DeSales at 4 p.m. Friday (May 24) on Ellensburg’s Rotary Field. The winner will advance to the state championship game at 1 p.m. Saturday (May 25) against either Mossyrock or Adna.

Saturday (May 25) to face the state’s finest singles players.

Manuel Perez, undefeated in singles play this season, beat Cashmere rival Warren Robertson, 6-3, 6-4, to advance into the championship round. There he kept his unbeaten streak intact by defeating another Cashmere opponent, Chad Raven, 7-5, 6-3, to take the district title.

On his way to the fourth-place finish at districts, Carlos Perez lost to Raven but rebounded to turn back a White Swan player, 2-6, 7-6, 6-2. Perez then overcame Robertson, 7-6, 3-6, 6-2, but had to forfeit his final match owing to muscle spasms from an earlier thigh injury.

Perez and Perez will be facing the state’s best 1A players as well as 1B/2B opponents.

“We beat everyone in the Caribou Trail League this year,” said coach Dave Schulz, “but because we’re not a member of the 1A CTL we’re not eligible to play for the league championship.”

Lady Lions enter round of 16

The 13-4 Lady Lions ended their regular season as champions of the Central Washington B League North and earned a first-round bye in district competition at East Wenatchee’s Sterling field last Friday (May 17).

Their first opponent at district was Lake Roosevelt, the team they defeated, 12-3 and 16-6, in a home doubleheader just one week earlier, neither game of which went beyond five innings.

“Lake Roosevelt played better than they did at that doubleheader,” said coach Lee Pilkinton.

While the Lady Lions were never really threatened by the Raiders en route to a 12-9 win, the game did go a full seven innings.

Sophomore pitcher Kelsey Baldwin threw the entire game and never allowed Roosevelt’s batters to close within discomfort range. Meanwhile, “every player on our team got a hit,” Pilkinton said.

Katherine Tannehill batted .500 with two-for-four hitting and scored two runs. League Catcher of the Year Baylee Canedo got a couple of hits and Julie McMillan hit two-for-three and scored a run.

With the Raiders in the rear view mirror, the Lady Lions faced Kittitas a half-hour later and the south division’s top-ranked Coyotes handed Liberty Bell its first district loss, 14-2.

“We jumped out on them 2-0 in the first inning,” Pilkinton said.

Tannehill and Cierra Ebbert each scored a run to give the Lady Lions the early lead and the defense held Kittitas scoreless until the third inning. In the third, the Coyotes scored four runs and hung on to a 4-2 lead into the sixth inning when they added two more.

Baldwin pitched through the first six innings against Kittitas but with more than 150 deliveries under her belt was beginning to show the effects of two back-to-back tours on the mound. Lily Darwood was brought in to relieve.

“They opened up on us in the seventh,” Pilkinton said of the eight runs the Coyotes added in the final inning.

The Lady Lions are guaranteed at least two more games in the double-elimination state championships at the Gateway Sports Complex in Yakima. They will meet Northwest Christian (Colbert) at 9 a.m. Friday (May 24).

“If we win, we move into winners bracket against either Napavine or LaSalle at 7 p.m. the same day,” Pilkinton said. “If we lose, we play in the loser’s bracket at 3 p.m.”

The Mountain Lions launched another assault on the Liberty Bell record book at the eight-school district track and field championships at Ephrata last Saturday (May 18) and as a result will send more athletes to the Washington Interscholastic Activities Association state championships than ever before.

“Three school records, qualifying in 19 events for state, and taking 16 athletes is a pretty good day’s work,” said coach Rocky Kulsrud. “Liam (Daily) set the school record in the 800 meters and 1,600 meters, and anchored the school-record 4×400-meter relay team, which took off 3 seconds from their previous school record.”

Sophomore Sarina Williams moved up the LBHS record ladder with the school’s fourth-longest leap of 15 feet, 6.75 inches in the long jump. Williams also stands in second place for the javelin throw.

The Mountain Lions managed to qualify a record number even absent the services of state B sprint leader, Austin Watson, who had also anchored the team’s 4×100-meter relay team.

Others who rocked the LBHS record book included Ashley Watson, whose personal best long jump of 14 feet,10.25 inches is seventh-longest in school history.

Kelsey Jensen qualified for state in the 300-meter hurdles with the seventh-best time in school history.

Claire Waichler’s 3,200-meter time is sixth-best in the record book, and Estrella Corrigan’s 400 meters the ninth-best.

“Another surprise was that all five relay teams qualified for state,” Kulsrud said, “and the girls 4×100-meter and 4×200-meter relay times made the top 10 board.”

Assessing the competition at state, Kulsrud had some observations.

“The boys 4×400-meter relay is currently ranked second and Liam has a shot in the 800 and 1,600,” Kulsrud said. “The overall throws in the boys’ javelin are relatively low this year, thus it is wide open. Anyone with a personal best throw could win the event, and that includes Mikey Michael.”