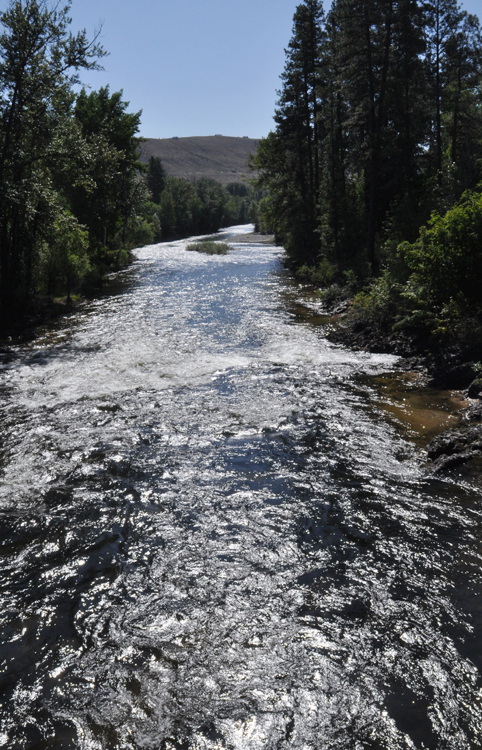 A proposal for a pond that would hold coho salmon in the spring and release the fish into the Chewuch River has drawn criticisms about the high costs of salmon recovery and a strongly worded letter from the Confederated Tribes of the Colville Reservation, saying that the Bonneville Power Administration (BPA) should work with them rather than the Yakama Nation Fisheries on fish projects in the area.

“Since the mid-1990s, the Yakama’s Mid-Columbia Coho Restoration Program has continually moved north into the Colville Tribes’ traditional territories,” wrote John Sirois, the chairman of the Colville Business Council, in his official comments on the proposal.

The proposed acclimation project on the Eightmile Ranch north of Winthrop is a joint effort by BPA, the U.S. Forest Service, which owns and manages the property, and the Yakama Nation Fisheries.

The comments were submitted to BPA and the Forest Service for an environmental assessment for the acclimation pond, a buried powerline, and water-supply pipelines. The Forest Service is deciding whether to issue a special permit to the Yakama Nation to build the pond and BPA is evaluating whether to fund the project.

The pond would be part of a larger coho-restoration project by the Yakama Nation Fisheries. They proposed Eightmile after other sites for a pond proved infeasible, according to the project description.

Sirois also mentions longstanding conflicts between the tribes over access to traditional fishing grounds. The Colvilles won a court battle against the Yakamas in 2010 that restored their fishing rights at Icicle Creek near Leavenworth.

The Colvilles, Yakamas and other regional tribes are signatories to the Columbia Basin Fish Accords, signed with BPA in 2008. The accords commit more than $900 million over 10 years to projects for endangered salmon and other fish, according to a history prepared by the BPA. BPA began funding the Yakama Nation to study the feasibility of reintroducing coho to the area in 1996.

In their comments on the acclimation pond, the Okanogan County commissioners focused on their frustration that their repeated requests for federal agencies to coordinate any activities in the county have been ignored. In a letter to the Forest Service supervisor, they wrote, “Once again we find ourselves in the position of asking your personnel to comply with the requirements of federal law.”

The commissioners requested a meeting with the Forest Service to discuss the restoration project and its impacts on the county. “We believe that litigation is the least effective way to form public policy but we are growing more convinced that it is our only recourse,” they wrote in conclusion.

Several of the commenters objected to the amount of money being spent on salmon projects. One wrote, “Sounds good for the fish. Please do not bill me for this project!”

A commenter identified only as “a weary citizen” wrote, “Another multi-million dollar ‘investment’ by the taxpayers at this time with this economy? I don’t know why we are being asked for input – I’m fairly certain this project is as good as set in stone. It disgusts me.”

But another wrote, “I am in favor of the project. Time for the power companies to pay back for disrupting the balance of nature.”

Others asked that the environmental assessment address the number of trees and native plants that would be removed and plans for revegetating disturbed soils. Another was concerned about whether the project would interfere with the Eightmile Ranch and its availability as a fire camp.

Representatives for the Colville Tribes and the Yakama Nation did not return phone calls seeking comment on the project.