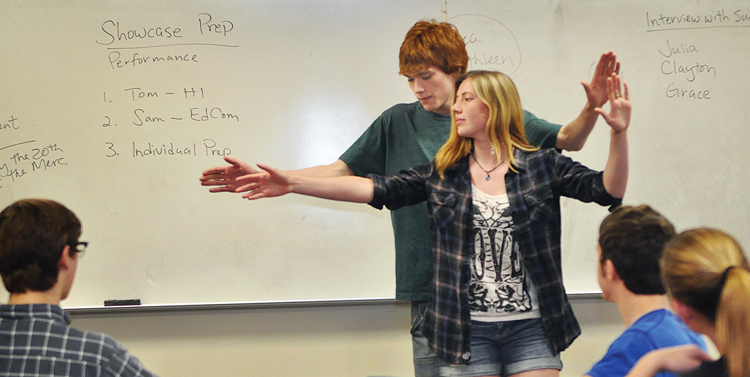 Photos by Sue Misao: Above, Jake Davie and Olivia Bowers practice their duo performance during Monday’s speech and debate class. Below, Sam Thomsen rehearses a compelling two-minute editorial commentary he wrote about the movie, 42.

When you hear kids debating the impact of social networking on American culture or reviewing contemporary cinema, you may not think they prepare by jumping around and counting backwards in Chinese, Japanese or Spanish. But students need to be mentally and physically limber to tackle the fast-paced demands of speech and debate.

Twenty Liberty Bell High School students have been honing their research skills, theatrical talents, creative writing and comic delivery all year, going head-to-head with peers in some 10 tournaments around the state. Liberty Bell’s speech and debate team won the district tournament for small schools and sent 13 kids to the state contest. 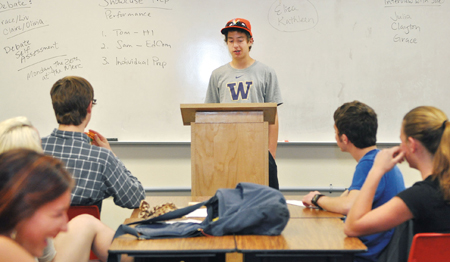 Now people who didn’t get to attend any of those taxing all-day contests will have a chance to see the team’s talents in a special community showcase Monday (May 20). In addition to a debate, the showcase will feature oratory (persuasive speech), editorial commentary, humorous interpretation, interpretive reading and duo interpretation.

Freshman Julia Schrum is performing an editorial commentary she wrote about why the police should not use police dogs. Schrum said the skills learned in the class have helped her to assess the credibility of various sources, since you can find anything when researching on the Internet.

Students spend hours compiling research and statistics to be able to argue either side of debate topics selected by the organization that sponsors the nationwide competitions. The topic featured in this showcase is “The rise of social networking has a positive impact on the citizens of the United States.”

Much of the material the students perform is original. They write their own persuasive speeches and editorial commentary and use their acting skills to interpret published material in other categories.

“It carries out into everyday life, how you carry yourself,” said Schrum.

The class helped sophomore Clayton Avery develop public-speaking skills, organize his writing and broaden his vocabulary. “This is a good display of our accumulation of work throughout the year, the pieces we excelled in,” he said.

Grace Bitzes, a junior in the class, agreed. “The last few years everyone’s been hearing about it, and now they can see what it is,” she said.

The class organized the showcase to give students an opportunity to share their hard work with the community, said Methow Valley Superintendent Mark Wenzel, who launched the team last year and taught the class this term. “When community members become an audience for student presentations, it raises the bar for them and signals how much we care about their learning,” he said.

Lori Patrick will be teaching the class next year. The school district is seeking a community member to help coach the team.

The speech and debate showcase will be presented on Monday at 7 p.m. at the Merc Playhouse in Twisp. Admission is free. For more information, call 996-2215.