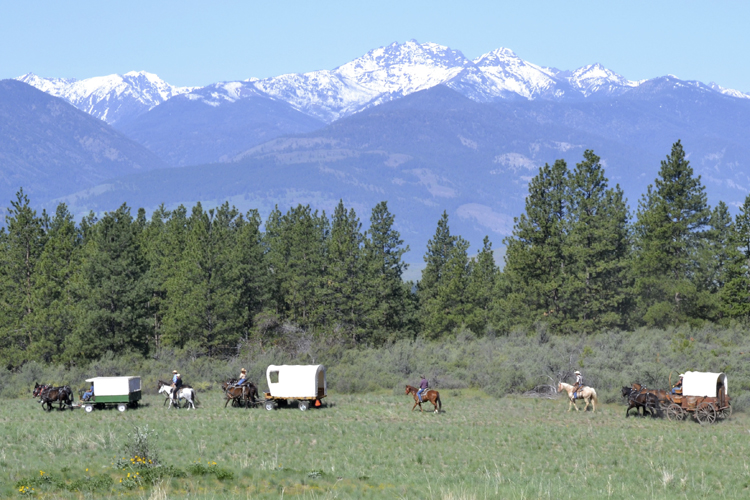 A hotter, drier and dustier than normal Ride to Rendezvous journeyed through the Methow Valley backcountry last week, taking mounted travelers on an adventure starting in the hills above Malott on Monday evening to rolling through downtown Winthrop at noon on Friday.

The Ride to Rendezvous was started 15 years ago by Washington Outfitters and Guides Association (WOGA) as a way to showcase its members’ outfitted trips and kick off the annual Packers Rendezvous during ’49er Days weekend.

Since then, WOGA has finessed the trip and welcomes guests each year to become “part of the family” on a multi-day adventure that, over the years, has taken a variety of scenic routes through the back country of the Methow Valley, Mountjoy said. 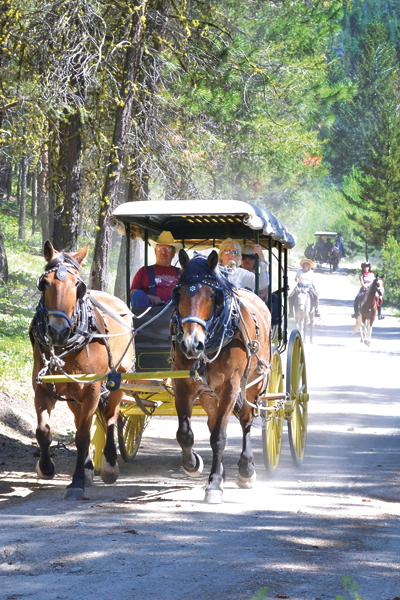 The 2013 Ride to Rendezvous started out of the Chiliwist Corrals on Tuesday morning, May 7. Day one of the journey circumambulated Dent Mountain; day two descended Finley Canyon; and day three led the riders through Pipestone Canyon and Campbell Lake to their last camp beside Bear Creek in the Methow Wildlife Area.

The 115 guests included plenty of newcomers and children and “more wagons than usual,” according to Mountjoy. A full crew of wranglers, cooks, wash crews, lunch and coffee crews gave the guests a catered experience.

“Without our crews we would be nowhere,” said Mountjoy. “They are really the unsung heroes of the ride.”

Two weeks before the trip, trail crews set out to mark the route that led through state, federal and private lands. “We are ever so grateful to the private landowners for their willingness to have us cross their land,” Mountjoy said.

This year six members of the Wounded Warrior Project (WWP) plus two family members were guests on the ride, one fully sponsored by WOGA, the WWP sponsoring the rest. All the warriors are veterans of the wars in Iraq or Afghanistan; two also served in Bosnia.

Shawn Graves, a peer mentor facilitator with the WWP, coordinated all the project participants on the Ride to Rendezvous this year, his third year on the ride.

According to Graves, the Wounded Warrior Project’s mission is to honor and empower injured service members by providing programs and services that meet their needs. The goal is to help re-integrate veterans into society and better their lives, as well as the lives of their spouses and caregivers.

Peer mentor Mike Carroll of Spokane was also on his third ride and happy to be back, saying, “You get a lot of gratitude out here on the ride; you can feel it from everyone involved.”

Newcomers Kyle Neff of Oroville and Joe Wright of the Tri Cities couldn’t get over the “awesome, 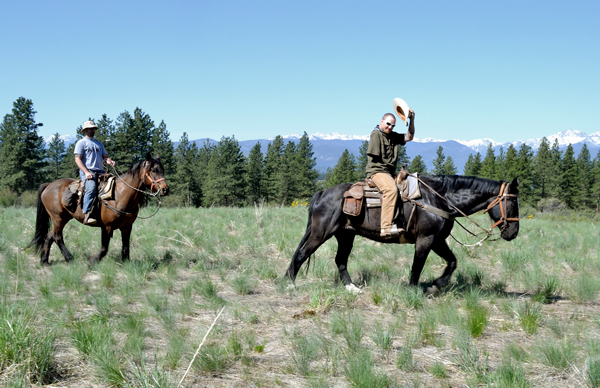 beautiful country” they rode through.

Also new to the experience were warrior Jeff Green of Cashmere, who brought his aunt Laurie along with him on the ride, and former Army lab technician Rick Lawson and his wife, Valery Tolle. Lawson noted that last week was Tolle’s first experience on horseback. “That first 10-hour day in the saddle was pretty rough,” Lawson said.

Graves said that the heat this year made for long days that were hard on the riders and hard on the horses. The warriors helped out with overheated horses, and “though we weren’t necessarily trained in the military to work with animals, we were trained to assist whoever needs help.”

Eric Tobin traveled to the Methow from Port Angeles with young Colton Barnett, a team of giant black Percherons, and a 100-year-old wagon for his fifth Ride to Rendezvous. His sister, Sally Tobin, flew up from San Francisco to join them on the adventure.

The green and yellow canvas-covered wagon was driven to Seattle from North Carolina in 1976 for the bicentennial, according to Tobin. “The guy who drove it across the country said ‘never again,’” Tobin said, noting the deafening rumble made by the iron tires on the road. Tobin farms with his draft horse team of Thor and Naomi, who pulled the wagon on the trip. A third Percheron in training walked alongside in harness. 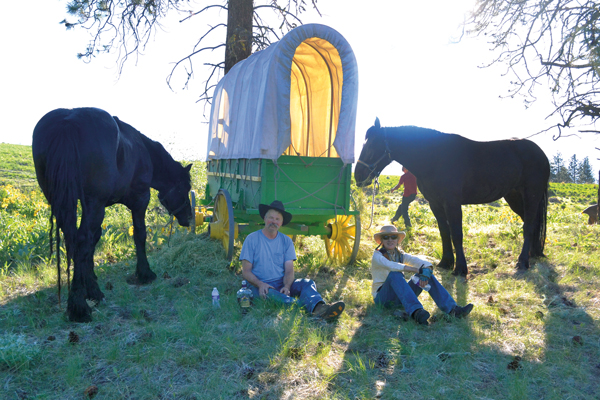 Gloria Sferra of Seattle, Carol Banks of Redmond and Yvonne Janssen of Maple Valley have been friends for over 40 years and call themselves “The Three Little Grannies.” It was Sferra’s fifth or sixth time on the ride, she said, and the first time for Banks and Janssen. The three made the journey in Sferra’s small carriage pulled by two matched Welsh ponies.

Sferra’s “lifelong friend” – Eddie Armstrong of Olympia – “trained the ponies to pull the carriage, and that made it all possible,” Sferra said. Armstrong and his grandson also participated on the ride, traveling in his own covered wagon.

Unfortunately, the Welsh ponies had to go home early after the first two days around 90 degrees. “The heat got to the mare,” Sferra said. “She got melted by the heat just like I am.”

Twisp veterinarian Dan DeWeert said he treated 15 horses for “tying up” – cramps brought on in equines by heat and exertion. “I treat some every year, but I saw more this year because of the heat,” DeWeert said.

DeWeert administered Vitamin E, selenium and anti-inflammatories to his patients by injection, and pointed out that many horse owners from western Washington fail to consider the drier air and higher altitude conditions on the ride. He also stressed the importance of conditioning before going on a long ride.