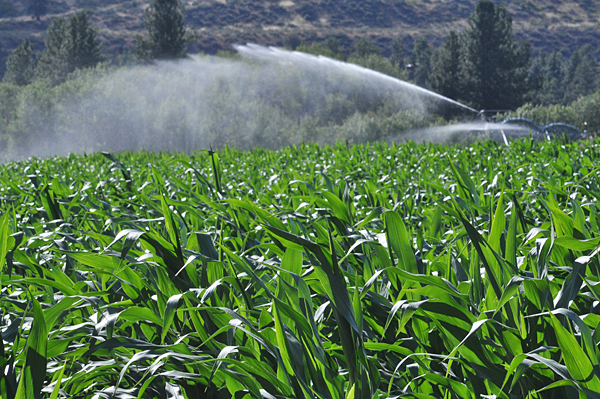 The Methow Valley Irrigation District must make significant changes in the way it operates in order to survive, and district directors are working through the details of a $9 million construction project aimed at keeping MVID alive.

The result would be a much smaller irrigation district through the elimination of one of MVID’s two irrigation canals.

“The directors feel the district is not viable for the long term in its current state,” said John Richardson, a Carlton orchardist and one of MVID’s three directors. The district is facing a number of challenges, and has been working for the past year to develop plans to overhaul the way the 100-year-old district delivers water to its 283 members.

The “Instream Flow Improvement Project” would address several issues, including the ditch operation’s impact on instream flows on the Twisp River. For more than 20 years, MVID has been embroiled in a series of regulatory and legal battles with federal and state agencies related to the water it takes from the Twisp River and the resulting impacts on endangered fish habitat.

The project is the result of years of negotiations among MVID, regulatory agencies and nonprofit conservation groups. The current project aims to assist MVID in providing water to its 1,100 irrigable acres, while minimizing the effects on endangered fish species.

About a year ago, MVID agreed to work with Trout Unlimited to develop alternatives to the current irrigation delivery system. This spring the directors arrived at a preferred alternative that will end MVID’s diversion from the Twisp River and shut down the district’s 12 mile-long West Side canal that has a headgate about 4 miles up the Twisp River and runs along hillsides above Twisp, ending a few miles above Carlton near the Twisp-Carlton Road.

The plan calls for about 80 parcels now served by the West Side ditch to be excluded from the district and property owners to be compensated for the cost of digging individual wells. A pressurized pipe system will be installed to provide water to about 140 acres on benches above Twisp, including Painters Addition and Lookout Mountain Road, that will remain in the district. The well would potentially be located on property owned by Dave Schulz behind Hank’s Harvest Foods.

MVID’s East Side canal, which diverts water from the Methow River near the North Cascades Smokejumper Base and extends 10 miles down the valley past Beaver Creek, currently consists of a gravity-fed system of unlined and concrete lined canals and some pipe.

Changes to MVID’s East Side canal system would include installing a gravity-fed pipe from just north of Mill Hill (just up valley from the Lloyd industrial property) and extending to Beaver Creek. About eight parcels beyond the lower end of the new pipe would be converted to wells.

MVID members within Twisp town limits are served by a “lateral” system of pipes that deliver water from the East Side ditch. The improvement project proposes that MVID and Twisp enter into an agreement in which the town would deliver water through its municipal water system. The town’s water system would need to be upgraded to accommodate the additional demand and a new well source would need to be developed.

Following an MVID board meeting Monday (May 13), Richardson said the district is considering the option of improving the existing lateral system to continue serving its members in Twisp.

Twisp town officials are hoping to come to an agreement with MVID that could help relieve a municipal water shortage that has plagued the town since 1997, when the state Supreme Court ruled that the town had abandoned a historical water right. Since 2002, the town has leased 400 acre-feet of water from MVID for seasonal use, but state health and environmental officials have denied additional water hook-up capacity to Twisp because of the temporary nature of the lease.

The town and MVID have drawn up an “Agreement in Principle” to explore the possibility of the town delivering water to MVID patrons. Mayor Soo Ing-Moody said she is hopeful that discussions will continue regarding conveyance of permanent water rights that could resolve the town’s longstanding water problems.

Ing-Moody said the town plans to renegotiate its lease with MVID “to make it more mutually beneficial.” She noted that in recent years, as a result of conservation measures and improvements to the town’s water system, Twisp has been able to serve its residents within its state allocation and has not had to use any of the leased water, for which it pays MVID $10,000 per year.

Richardson said MVID is on a fast track to complete the Instream Flow Improvement Project, because the Washington Department of Ecology (DOE) is requesting $6.2 million from the state Legislature, through DOE’s Office of Columbia River, for the next biennium. The timeline calls for work to begin in fall 2014 and be completed in spring 2015. The construction would need to take place before and after the irrigation season.

The $6.2 million in state funding would leave the project $3 million short of estimated project cost, Richardson said. But a representative of the National Marine Fisheries Service (NMFS) has told MVID the agency would support funding for the project to improve habitat for Chinook and other species listed under the federal Endangered Species Act.

“I am confident they will get the funding for the project, because getting MVID out of the Twisp River has been a goal for the last 30 years,” Richardson said. “When you talk to fish biologists … the best habitat in the Methow Valley is the Twisp River.”

Having the state ecology department and NMFS on MVID’s side is unusual. The district has been the subject of numerous regulatory and legal assaults from those and other agencies and Okanogan Wilderness League, an environmental organization, over the past two decades.

These actions are among the reasons that MVID began its search for a long-term solution to environmental concerns, which stem primarily from MVID’s diversion of 11 cubic feet per second from the Twisp River, Richardson said.

MVID has a permit from the Washington Department of Fish and Wildlife to bring an excavator into the Twisp River once a year to create a “push-up” dam, which channels water toward the irrigation diversion.

“NMFS has told us that method of diversion must end and we must come up with a plan to change it and if we do not, they would go after the permit” to prevent MVID from continuing to bring the excavator into the river and impacting habitat for endangered fish, Richardson said.

Even without the fish issue, MVID might have eventually faced the need to limit its withdrawal, Richardson said. “Richard Price, the district lawyer, said diversions would eventually be limited because water is a precious resource … whether there were fish in the river or not. He told us, ‘At this point the fish are your friends because of the availability of public funding’” to address Endangered Species Act issues, Richardson said.

The changes in water delivery will also address future costs that MVID was facing to maintain its infrastructure if it continued to use its open canals, Richardson said.

“There is over a mile of concrete line section above the Twisp River Road and Poorman Creek Road that was done in the 1930s,” Richardson said. “The engineers have told us it’s not a matter of if, it’s a matter of when that concrete section starts to slide off the hill.”

Trout Unlimited is working with MVID to complete State Environmental Policy Act studies required for the Instream Improvement Project. The district is currently receiving the results of an advisory vote asking the 283 members of the district whether they favored the proposed construction project.