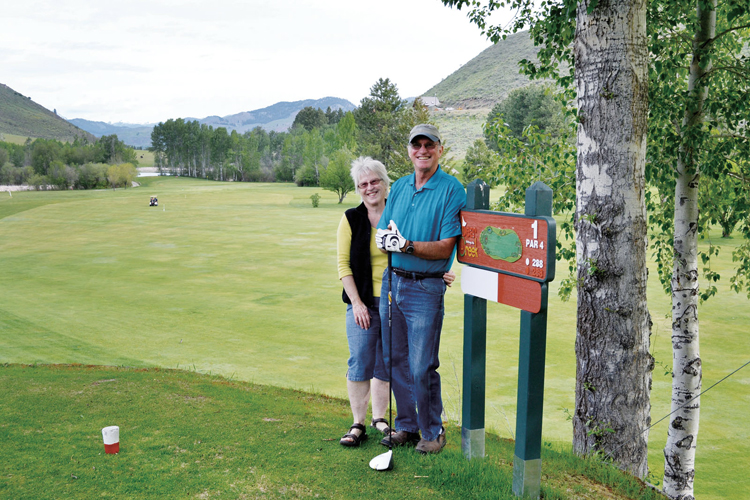 What do you do when a thing you love is threatened? You do what you can to protect it, of course, even if – in the case of Ash and Linda Court – it means coming out of retirement to do so.

With deep family roots on the land and a sense of responsibility to the community, the Courts are again fully involved in running Bear Creek Golf Course after repurchasing the land and business one year ago this month.

After they took over ownership last May, they tried running the course together with the former management until, by the end of summer, internal conflicts made it clear that the shared arrangement was not working, they said.

“We had hoped we could do this more from a stand-back position, but reality hit that we would have to run the course ourselves,” said Ash.

They now have four full-time and several part-time employees. Dave Swenson, founder of the Rocking Horse Bakery, will come on full-time in June to run the pro shop. Ash and Linda expect to work 12-hour days this summer.

“This golf course won’t sustain itself without the owners working for free,” Linda said. “It has always been subsidized by the owners’ labor,” or checkbook, in the case of the five years it was owned by McCormack Vineyard Partners, she added.

The Courts thought they had retired from the golf course business on July 4, 2007, when they signed the sale documents.

“We were thinking we were going to retire,” Linda said. “We sold with the idea that we were leaving it behind.”

During the next five years they built a garage at their home overlooking the golf course, did some landscaping and made updates, “settling in for retirement,” Ash said. “We had neglected our house in all the years we were so busy with the golf course.”

Linda began making quilts and was relieved to be done with the 6 a.m.-9 p.m. work schedule she had maintained for years. Ash started backpacking and fishing in the high lakes of the Cascades and Pasayten Wilderness. “I was looking forward to doing more of that,” he said.

In early 2012 Linda received an anonymous email stating that the lender had taken over ownership of the golf course. She inquired at Cashmere Valley Bank to find out if the golf course was in danger and learned that, from the bank’s point of view, the property would go to whoever bought it, regardless of their plans for the golf course.

The 175-acre property had been subdivided into eight 20-acre parcels during McCormack Vineyard’s tenure, and the Courts grew concerned that a developer would build on them and destroy the golf course, so they took the plunge and bought the property back from the bank.

“The driving force for us was the 26 years the community had given us,” Linda said. “If you know it’s in danger, how can you say ‘no?’”

The Courts first became managers of Bear Creek Golf Course in 1982, taking over operations from Ash’s father, Herman “Herm” Court, who had run it by himself since he built the first three holes in 1965.

Ash himself was raised on the property from the age of 4. His father had bought 463 acres and a house that they shared with the neighbors, in 1948. In the summer of 1950 Herm built a kitchen addition which brought indoor plumbing to the home. That original house is now the school building at the Shafer Museum.

In 1951 Ash’s father started building what is now the first floor of the clubhouse. The family moved in 1958. “It took him years to build the second story,” said Ash. Herm ran the place as a cattle ranch until he decided there might be a better way to use the property, Ash said. He sold all his cattle in 1964 and started the golf course in ’65.

Linda and Ash married in La Grande, Ore. on Dec. 31, 1966, and moved back to the Methow in 1969. Ash coached football, taught at Winthrop High School, was a smokejumper and sold insurance while Linda worked as a teacher’s aid, Winthrop Town clerk, and at Sun Mountain Lodge while raising their four children – Kimber, Kerby, Brian and Bryce – on the golf course property.

When they began running the golf course – Linda running the pro shop with Ash as superintendent – Linda remembers her father-in-law saying, “You’ll never be able to make a living running this golf course while raising four kids.” Herm’s concerns didn’t stop them from making a go of it for the next 26 years.

“The question is, can we pull this off to keep the property together and make a self-sustaining business?” Linda asks now. “We don’t really know.”

Recognizing the need to find revenue beyond greens fees, the Courts are planning to expand the facilities this year, aware that it might seem crazy to be developing the golf course.

“We’ve got a business that’s barely scraping by and now we want to pour more money into it,” Linda marvels. They added three new tees this spring and have established a new set of “combo” tees, making three 18-hole combos, allowing golfers to play the forward tees, back tees or combo tees. They are also extending their summer evening hours to allow later play. They would eventually like to expand the course to 18 holes.

Bear Creek’s Junior Golf Program continues to be a success, with room for 30 kids in three sessions targeted at different skill levels, running from July 9-Aug. 15 this year.

But the big news is the construction this fall of a new, “simple and functional” clubhouse that will allow them to expand their eating facility and hopefully attract some non-golfers who “will want to come for the peace and quiet and incredible views from here,” said Ash. They plan on donating removable fixtures from the existing building for salvage starting the week after Labor Day, and offering up the structure to the fire district for a practice burn. “We want to start with a flat piece of land to build new on,” Ash said.

The Courts are tentatively planning to keep the golf course open for play during construction, through the end of October this year. For more information on Bear Creek Golf Course, visit www.bearcreekgolfcourse.com.