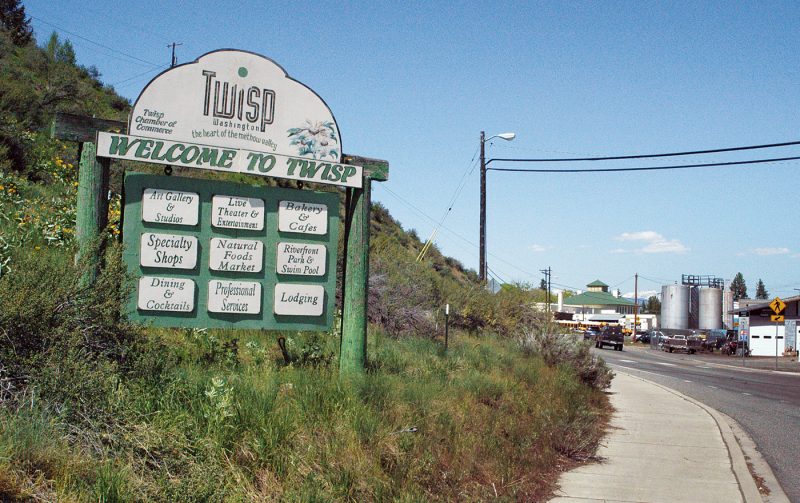 Photo by Ann McCreary: The “Welcome to Twisp” sign on Highway 20 across from TwispWorks will be removed because it violates laws regulating signs along state highways.

The “Welcome to Twisp” sign perched on a hillside above Highway 20 across from TwispWorks will need to come down because it violates laws regulating signs along state highways.

The sign, which advertises amenities such as shopping and dining, was identified as noncompliant by the Washington State Department of Transportation (WSDOT) in a periodic survey of signs located in the rights of way of state highways.

The sign is one of several along Highway 20 in Twisp found to be in violation of laws that regulate outdoor advertising, said Pat O’Leary of the WSDOT Highway Advertising Control Program.

“Longstanding state and federal laws regulate signs” along highways, O’Leary said. Laws intended to improve and preserve scenic qualities of the national and state highway systems date back to the 1950s, he said.

State law prohibits advertising in the rights of way along state highways. In the case of the Welcome to Twisp sign – and a few other signs on the same hillside – WSDOT sent a letter to the property owner stating the signs must be removed.

Other signs on the property have already been taken down, and plans are being made to remove the Welcome to Twisp sign as well.

“That sign is worn out and needed to be repainted and updated. We had already been having discussions about trying to update that sign,” Stork said.

WSDOT is coordinating with Twisp officials to notify other property owners about signs that violate the prohibition of advertising in the Highway 20 right of way through town. O’Leary said a list of offending signs has been provided to Twisp, and the town will notify the property or sign owners. Twisp Council member Traci Day said letters regarding the signs are being prepared.

O’Leary said the WSDOT Advertising Control Program is responsible for monitoring about 6,000 miles of state highways. Due to budget and staffing cutbacks, the monitoring process takes a long time, he said.

The prohibition of off-premise advertising along state highways is in accord with Twisp’s recently adopted sign ordinance, which likewise limits commercial advertising to business premises. The sign on Highway 20 for businesses or services located elsewhere in town violates the town’s ordinance as well.

“Our sign ordinance provides ample opportunity for everybody to advertise their own business on their property,” Day said.

Twisp has been providing information to local businesses about the sign ordinance, adopted earlier this year. The ordinance regulates size, location and lighting of permanent and temporary signs within town limits. It provides that non-complying signs can remain in place as long as they aren’t significantly altered in a way that increases their noncompliance.

The town is currently working with business owners to inform them about provisions regarding advertising through sandwich boards, Day said. “Everybody is allowed to have a sandwich board. It has to be on their own property,” she said.

The town sign ordinance requires that all new signs receive a permit and comply with the provisions of the ordinance.

Stork said Twisp’s business and government leaders are working toward the same goals with regard to signage in town.

“The chamber is doing a lot of new planning and marketing … focused on bringing more visitors and attention to Twisp. The town is really working on better signage for downtown Twisp. We want to make sure visitor communication is clear, looks good, stays fresh,” Stork said.