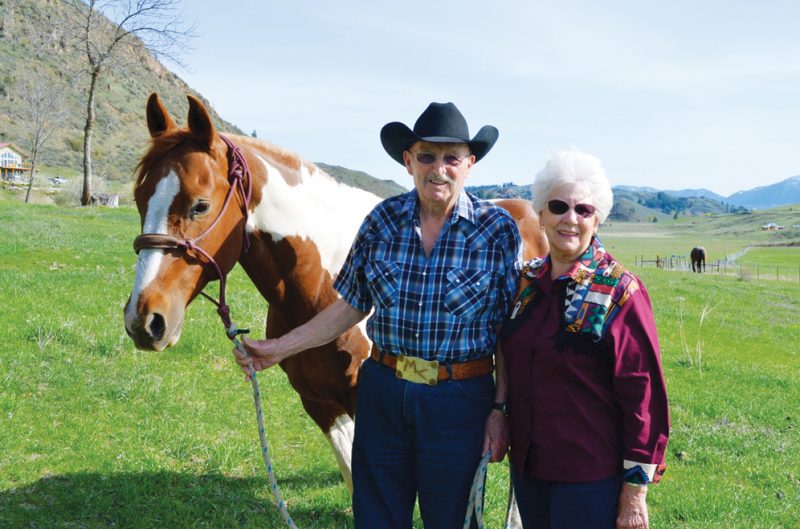 Representing several generations of Methow Valley history, as well as lifetimes of service to the community, Tom and Fae Graves serve as Grand Marshal and Grand Lady of the 68th annual Winthrop ’49er Days celebration.

“We have said ‘no’ for many years; there are other people far more deserving,” said Fae, but when she learned that the event this year would be recognizing the old packers, and she saw the image of her own father, horse packer Clyde “Ole” Scott, on the official ’49er Days poster, she knew that “this is the year to do it.”

Tom figures he has been involved in every ’49er Days celebration except two –1951 and ‘52 – the years he spent in the infantry during the Korean War. And he has ridden in every parade since the first one in 1959.

That has entailed, among other things, carrying the banner of the Methow Valley Horsemen to promote the twice-yearly Methow Valley Rodeo since 1972. He also served as parade chairman for many years, responsible for lining up the participants, assembling the judges, and making sure the parade started on time – 11 a.m.

“One year,” 1970 as he recalls, “we didn’t start it until noon. Boy, were they pissed,” he said. “It runs pretty smooth now. That was the year we started taking parade entries.”

And this year for the first time, Fae and Tom plan to ride in the parade side by side on two of their own horses in their new roles as ’49er royalty.

Giving back to the community is very important to both of them, noted Fae. “If a community is worth living in, it’s worth working for,” agreed Tom. Out of the blur of their combined actions you can just make out their figures – if you can keep up with them – as they dash from one activity to the next.

Besides tending to their large combined families, Fae spends much of her free time helping out at the Methow Valley Senior Center in Twisp. “I chose to be involved in the Senior Center because the need is there,” Fae said.

She co-chairs the center’s annual Western Sale on Memorial Day weekend, for which Rummage Room volunteers save promising gear and attire all year long, she said. This year she helped outfit ’49er junior royalty Chuck Long with the shirt and boots he’ll wear at the ’49er Days events.

Fae was born and raised on the Golden Doe Ranch between Twisp and Carlton, where she lived until her family moved when she was 16. She graduated from Chelan High School in 1952 and went to college in Ellensburg.

Fae had three children and “traveled the world” during her first marriage, eventually settling down in Wenatchee where she became reacquainted with Tom Graves, whom she had known her whole life. The two married on Christmas Eve 1977 and have lived at their home on East Chewuch Road ever since.

Tom came into the world in the same room where his father was born on the family’s ranch at the south end of Lake Pearrygin. His grandfather, Charles Graves, started the homestead in the late 1890s.

Tom graduated from Winthrop High School in 1947, and over the years worked as a horse packer and smokejumper, built trails and logged for the U.S. Forest Service. He ran Pasayten Pack Trips until 1981 and these days operates Chewack Enterprises, building fences, running six snowplow trucks, and fighting wildfires.

He has been an active member of the local American Legion chapter for 60 years, and will proudly watch his grandson, Shawn, lead the color guard in Saturday’s parade.

Marshal Tom and Lady Fae’s bucket lists look pretty similar: They both hope to stay healthy and active doing the things they love. Fae said she would like to continue taking trips to Hawaii with her sister, and Tom wants to keep on riding his horses into the backcountry “for another 10 or 15 years, I hope.”

In Saturday’s noontime parade, Liberty Bell High School junior Zoey Marchiney and Independent Learning Center junior Kira Cramer will be adorned in satin and tiaras, waving from Claude Miller’s wagon. Accompanying the ladies – in a first for the more than 50 years of parades – will be Liberty Bell senior and old-West dandy Chuck Long in black hat and cowboy boots.

“Chuck is the first young man to be junior royalty,” noted ’49er committee member Linda Wilson, who, as a recently retired career high school teacher, believes strongly in equal opportunities for everyone, she said.

The three “are very different kids who balance each other out,” said Wilson. “They all did a great job answering the selection committee’s questions and presenting themselves. Chuck charmed the ’49er committee completely.”

Marchiney watched all the ’49er Days parades as a child and “always noticed the royalty,” she said, now enjoying wearing the royal attire herself.

The dresses – custom made by Donna Martin – “are pretty cool; they have a hoop skirt and everything,” noted Marchiney. The 16-year-old is herself a budding fashion designer, and is planning on going to New York City to enter the fashion industry after high school.

Marchiney recently designed and modeled a piece for the Confluence Gallery’s Trashion Show, and is planning on doing her senior project in fashion design next year, she said. She is also a Liberty Bell athlete, playing on the volleyball, basketball and track teams.

Cramer takes classes at both the ILC and at Liberty Bell, but her passion is for theater. She is currently playing the Duchess in the Merc’s Alice in Wonderland, fast on the heels of portraying Bet in the Methow Valley Theater’s musical Oliver!

“I have used being on stage my whole life to kind of push myself to overcome fears and anxiety,” said Cramer, a veteran of about 12 shows at the Merc and also a regular with the Missoula Children’s Theater.

Cramer remembers being in every parade as a child, often waving from the Winthrop KOA float. She is part of a “huge” fifth-generation Methow Valley family, whose members have contributed to many ’49er Days celebrations over the decades.

Long describes himself as “a history guy. I love learning about everything that happened in the past,” he said. He enjoys what he calls “the embedded history” of the Winthrop ’49er Days and being part of an event that celebrates the valley’s past.

He volunteered to help out at the Washington Outfitters and Guides’ Wild Game Dinner in April where he got to know some of the outfitters who taught him to shape his black felt cowboy hat. “I’m excited to wear it,” he said. “It’s a pretty cool costume.”

Long said he is “most fascinated” by June 6, 1944 – the D-Day invasion – because his grandfather, Bob Long of Twisp, was a member of Patton’s Third Army. He is also interested in medieval sword fighting and enjoys debating current topics in his Contemporary World Problems class. 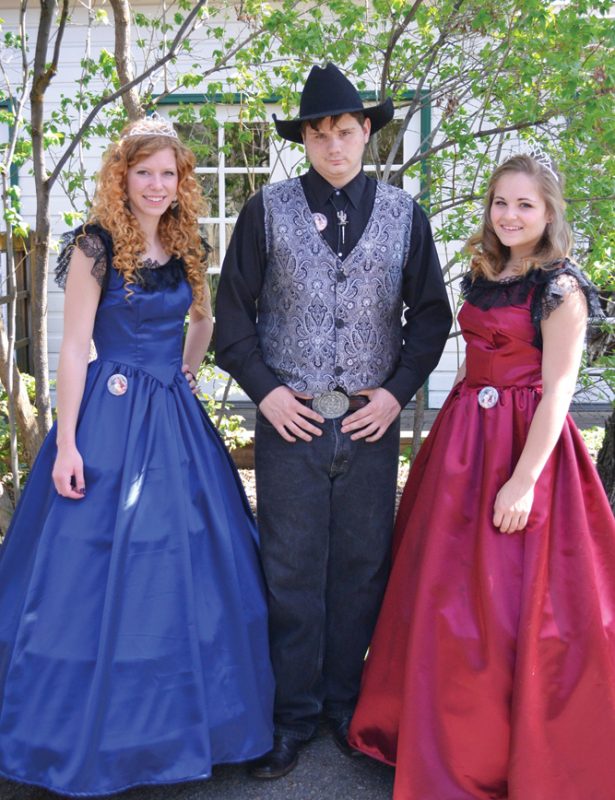