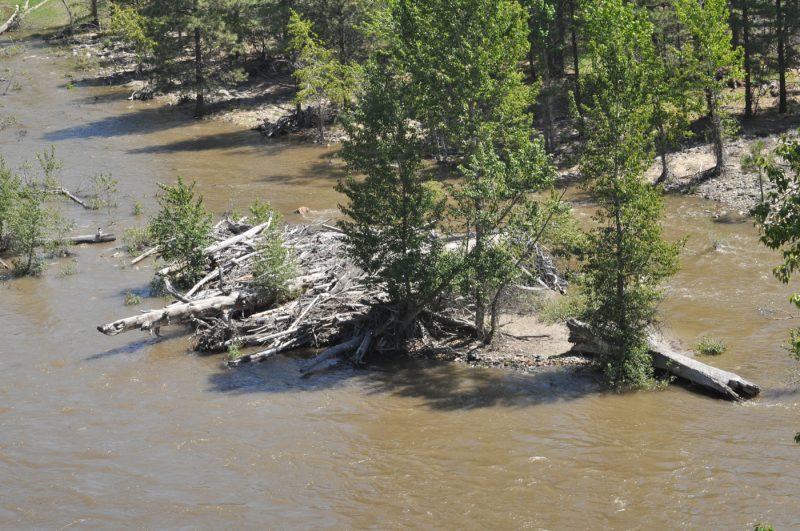 Photo by Sue Misao: The Methow River, seen here between Twisp and Carlton on May 8, is muddy and high but well below flood stage.

With higher-than-normal temperatures expected to continue at least through Saturday, the National Weather Service (NWS) has issued a flood watch for the Okanogan River, primarily near Tonasket, starting Wednesday night (May 8). The Methow River has risen but is not currently a concern for flooding, according to Katherine Rowden, a NWS hydrogeologist.

“There’s no snowmelt coming down from Canada to fill the Methow River – that’s the big kicker for the Similkameen Basin and Okanogan River,” said Okanogan County Emergency Manager Scott Miller.

At lower flood levels between 15 and 17 feet, low-lying pastureland and other areas along the Okanogan River valley between Oroville and Okanogan would be flooded, said Rowden. At 18 feet, major flooding of surrounding cropland is possible, and homes and buildings near the river could see basement and first-floor flooding. Low-lying areas around Omak and Okanogan could also experience some flooding, said Rowden. The Okanogan River is now expected to peak at 17.72 feet Sunday or Monday, said Miller.

At Goat Creek, the Methow River was at 17.25 feet on Tuesday, about 1.5 feet above the average for the date but 1.3 feet below the maximum recorded by the NWS over the past two decades.

At Pateros, the Methow River was at 6.6 feet on Tuesday, well below the flood stage of 9 feet. Forecasters expect it to reach close to 8 feet before dropping next week.

Forecasters are fairly confident about river forecasts looking ahead three days, but after that the forecasts become less reliable, said Rowden. “That’s why we tell people to check the forecast daily,” she said. “As of today [Tuesday May 7], this is what we think, but it might just change.”

The high river levels are being caused by rapidly melting mountain snow, which also makes the rivers dangerously cold and can carry large debris, according to the Weather Service. While there is still considerable snow in the Cascades to feed the Methow River, there is much less than in Canada, said Rowden.

The weather forecast includes a small risk of thunderstorms this week but no other precipitation. Above-average temperatures, with highs in the 80s, will produce considerable runoff through at least next Tuesday (May 14). Weather is expected to be somewhat cooler this weekend.

The Okanogan County Department of Emergency Management has empty sandbags that can be provided to individuals or cities. Call (509) 422-7207 for assistance.

People can track forecasts and river levels on the NWS website at http://water.weather.gov and the Northwest River Forecast Center at www.nwrfc.noaa.gov. Links and information about forecasts and flood preparedness are also available through Okanogan County Emergency Management at okanogandem.org.