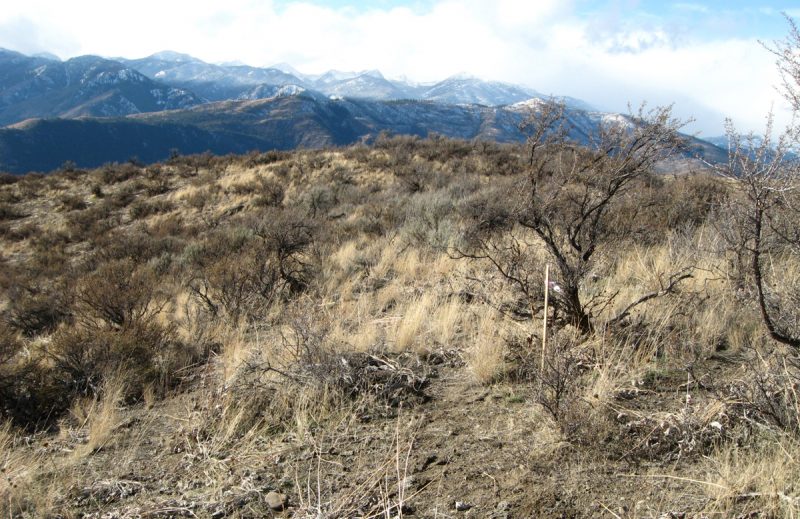 Photo courtesy of Dept. of Natural Resources: The powerline route crosses some 12 miles of state land,
mostly on shrub-steppe habitat.

The PUD can condemn state land for its Pateros-Twisp powerline, said the Court of Appeals in Spokane in a ruling issued Tuesday (May 7).

The decision comes after three years of litigation over the Okanogan County Public Utility District’s efforts to claim by eminent domain land that the state has argued cannot be condemned because it is already devoted to a public use – namely, leased for grazing.

“We conclude that the State trust lands may be condemned as a matter of law,” wrote the three-judge panel in their 20-page decision. The lands in question are held in trust to benefit schools and managed by the Department of Natural Resources (DNR).

“The State’s argument is not persuasive for several reasons,” wrote the judges, who heard oral arguments in the case in February. They concluded that state law would not mention “school trust lands ‘that are not devoted to or reserved for a particular use’” if all state lands were automatically set aside.

“We are very disappointed in the ruling and will be evaluating what the next appropriate steps might be,” said Matthew Randazzo, special assistant to Commissioner of Public Lands Peter Goldmark. Goldmark, who brought the case on behalf of DNR, argued that he has a fiduciary obligation to manage state lands for future generations. The powerline route crosses some 12 miles of state land, mostly on shrub-steppe habitat.

Okanogan County Superior Court Judge Jack Burchard ruled in May 2010 that the PUD could condemn the state lands in question because the powerline constitutes a public use and the powerline is not incompatible with grazing.

The Appeals Court judges also cited a Washington law that states that a PUD “may take, condemn and purchase… any public and private property… including state, county, and school lands… for… transmission lines, and all other facilities necessary or convenient.”

The judges concluded that DNR’s case ignores precedents set by the state Supreme Court, which has held that “the fact that school trust lands are devoted to the purpose of financing education was insufficient to exempt the property from condemnation.”

The Appeals Court ruled that the state had not shown that the land is dedicated to a public use simply because it is leased for grazing or being actively managed by DNR.

The land at issue has five active grazing leases and two grazing permit areas that net $3,000 annually for schools, according to the judges’ summary. In their ruling, the judges noted the PUD’s argument that the fees paid to the state for condemnation could in fact benefit schools by providing additional revenue.

The Methow Transmission Project, initially proposed in 1996, has been contested in the courts for years, first in a case that successfully argued that the PUD had to conduct a formal environmental impact statement about the effects of the 27-mile long transmission line. After the environmental analysis was completed in 2006, the PUD commissioners selected the Pateros-Twisp route.

The adequacy of the environmental impact statement was itself challenged in court. This Court of Appeals previously found that the environmental effects of the project had been adequately disclosed and that the PUD had not acted arbitrarily and capriciously in selecting this route for the transmission line.

Most recently, Goldmark took his case to the state Supreme Court to compel the attorney general to represent him in this appeal.

The PUD negotiated easements with 85 percent of the affected property owners, but a handful – including one of the largest property owners along the route – refused to grant the easements. The PUD eventually sought to acquire the remaining easements through condemnation. The court imposed a stay in 2012 on determining the value of the private property in question, pending the outcome of the state’s condemnation appeal.

The PUD’s general manager was out of the office and was not available to comment on the ruling. The impact of the decision on breaking ground to construct the powerline, which the PUD had hoped to begin at least three years ago, could also not be learned as of press time.