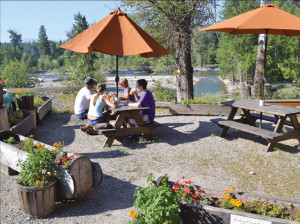 At last Wednesday’s (April 17) council meeting, the five members of the Winthrop Town Council, Mayor Dave Acheson and Clerk/Treasurer Michelle Gaines dove right into the debate over whether to install permanent speed indicator signs at problem areas around town. After 20 minutes of lively discussion, council unanimously denied the request for the signs made by residents of Castle Avenue at the council’s previous meeting.

Following up on the April 3 meeting, Acheson reported that state Transportation Improvement Board funds would pay for the units, coming in at around $5,000 a piece. The mayor also concluded that removable speed bumps at $1,000 to $1,500 each would “not be appropriate for this situation” as they are designed to keep speeds below 5 miles per hour.

With all the council members weighing in and only Sue Langdalen expressing an interest in “giving them a try,” the arguments against hinged on aesthetics and the efficacy of such signs once local drivers get used to them.

“People who bypass Riverside on big weekends are going to do it anyway,” said council member Rick Northcott, referring to the tendency of local drivers to avoid backed up traffic along Highway 20/Riverside Avenue in downtown Winthrop.

During council comments, after the speed indicator sign request was denied, Northcott stated “I don’t want to discount the concerns of the people on Castle. If there is some way we can get more patrols up there it would help address their concerns.”

In other news, Town Planner Rocklynn Culp reported on the status of Winthrop’s proposed Riverwalk trail.

After working with the state Recreation and Conservation Office (RCO) last October to revise the scope of work of the Susie Stephens Trail Phase 2, the Town found itself suddenly shifting its focus from how to continue that trail south, to how to begin work on the Riverwalk trail – now included in the $365,000 grant proposal, Culp said.

“Luckily for us there is already a lot of momentum and interest in the trail among community members,” said Culp. “We would like the momentum to be led by the business community. We don’t want the town to ramrod the process.”

Around one-third of the necessary trail easements have already been donated, and a private citizen has pledged $30,000 toward the construction of a pedestrian underpass under the Highway 20 bridge over the Chewuch River, according to Culp.

Unfortunately, funding for the grant portion hinges on the current state budget debates, said Culp, adding that there is a good chance the Legislature will not fund the Washington Wildlife and Recreation Program, from which the funding will come. “We should know by the end of April or into May if the Legislature goes into special session,” Culp said.

If funds are appropriated, the RCO will write up a contract for the project in June; Winthrop will certify that it can match the $365,000 through some combination of local contributions, donated land value, volunteer time and other grant sources; and the Town will sign in July. Then there will be a three-year window during which to complete the project with a one- or two-year extension possible, Culp said.

A public meeting to share ideas on the Riverwalk and get input from the community is tentatively planned for the end of May or early June, Culp said. She will also be working with state and federal agencies to secure necessary permits early on, she said.

The total cost of the Riverwalk is unknown at this time, said Culp, acknowledging that design and engineering will be expensive in “tight spots” where the trail will need to be cantilevered along the riverbank. “I’ve learned from experience not to guess about costs.”

File photo by Laurelle Walsh: The outdoor area behind Rocking Horse Bakery is along the proposed Riverwalk trail.