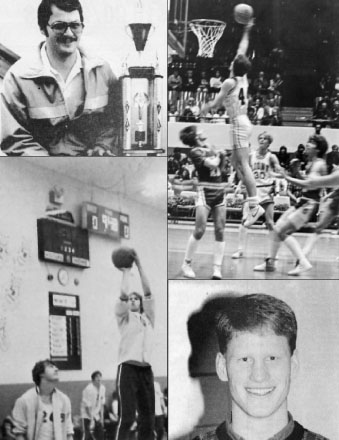 On rare occasions a coach comes along who can lay claim to the title of “Sportswriter’s Dream.” Such is the case with former Liberty Bell High School basketball coach (and player) Scott Darwood, not so much for a stellar win streak because Darwood only coached varsity ball for three seasons, but more for his passionate devotion to the game.

“I loved playing for Liberty Bell and coaching there as well,” Darwood confessed. “I absolutely love the sport and it’s been my dearest friend in life. I also coached football and baseball but hoops was and still is my first love.”

Shortly after publication of “Hoop Memories” in the Methow Valley News in March 2012, a sports article that revisited Twisp, Winthrop and Liberty Bell basketball teams of yore, the paper received a near-dozen pages of copious single-spaced handwritten notes lovingly and laboriously penned by Darwood and dedicated to the LBHS players with whom he was familiar from 1974 through 1989.

Darwood is the son of the late Arthur “Bud” and Mae Darwood, the former a one time mayor of Twisp and the latter once editor for the News. He played basketball for Liberty Bell from 1975-1977 and even served as the sports reporter for the News while he was playing high school ball “because my mom couldn’t find anyone else to do it.” He served as varsity assistant and junior varsity head coach from 1984-86.

To put the coach’s comments in perspective, his tenure at LBHS followed a line of prior LBHS coaching  notables including:

The former coach began with his All-Star selections. Here is Darwood’s All-Time team for the first 16 years:

Darwood’s comments on the top players and his all-time 12 favorites read like pages from a scouting agent’s notebook and are best appreciated just as he wrote them:

Ray Ellis (1973-76) – Best ball player in my opinion to ever come out of Liberty Bell. Led the entire state in scoring most of his senior year and finished second at 27.7 points per game. Was LBHS all-time scoring leader with 1,187 points including a 40-point district game vs. Pateros in 1976. A scoring machine inside or outside (before the three point line). Unstoppable, remarkably unselfish and humble. Great rebounder who could leap out of the gym. Hated to lose more than any person I’ve ever known. Tremendous athlete in all sports. Had a very successful four-year college career. All-League.

Rod Gardner (1973-75) – In my opinion the best guard in the first 16 years I saw. Good speed and quick first step. Quick hands. Good ball handler and penetrator with great court awareness who could finish or dish equally well. Tenacious on defense. Could hit the long ball before the advent of the three-point line. Hated to lose. Great competitor. All-League.

Kerby Court (1987-89) – Had absolutely no weaknesses except lack of speed maybe but more than made up for it with attitude, effort and desire. Understood the game better than any player of the first 16 years. Unmatchable court savvy and awareness. Best attitude of any athlete I ever coached in any sport. One of the four best outside shooters in the first 16 years along with Ellis, Gardner and Dominic Kistner. In district playoffs scored 44 points against Soap Lake to set LBHS scoring record for points in a game. Also set state record for three pointers in one game with 14 on 14-21 shooting. Most of those threes were from 6 to 10 feet behind the high school three-point line. All-League.

Rodney Paul (1975-77) – Fierce rebounder and competitor who went after rebounds like no other. A killer in the paint at scoring as well as rebounding. Against Okanogan in 1976-77 season hit 17 straight field goals in 17-18 shooting performance and added 21 rebounds. Shot 61 percent from the floor for senior season. Often double-teamed. All-League.

Jason Webb (1985-87) – Could leap out of the gym and loved to rebound. Most underrated player in the first 16 years of LBHS hoops, I think. Unstoppable offensively within 15 feet of the basket and often double-teamed and sometimes triple-teamed. Had a 37-point, 24-rebound game vs. good Pateros team even while being double-teamed most of the game. All-League.

Daren Belsby (1982-84) – One of the smoothest and gifted athletes ever. So fundamentally sound in every area. Tough scorer and rebounder inside. Great leaper. Great attitude. Very coachable. Led LBHS to first boys state appearance. All-League.

Bart Northcott (1976-78) – Great ball handler, floor general and playmaker. Extremely quick hands and a master pickpocket on defense who could steal you blind. Along with Gardner and Sam Smith one of three sets of quickest hands in first 16 years. All-League.

Greg Waller (1976-79) – Good ball handler and floor general. Could score inside or out. Used his body as well as anyone to gain position for scoring and rebounding. Great defensive player and great court smarts. Once scored all of team’s 22 points in a junior high game. All-League.

Rusty Brooks (1980-82) – Could leap out of the gym. Great rebounder and scorer. Great timing as a shot blocker. Very smooth. All-League.

Dominic Kistner (1983-85) – Could really launch from way outside. One of the smartest ball players to ever wear a Lions uniform. Made up for lack of speed with his court smarts and knew how to use his body effectively to get to the hoop or to the free throw line where he was a great free throw shooter. Great leadership skills. One of the four best outside shooters in the first 16 years. All-League.

Darwood didn’t stop at selecting his top player picks. He also ranked them in “order of ability” at various offensive and defensive positions.

“Ten of these top 12 also played football and were all team leaders and started there as well at key quarterback, running back and end positions, all keys to the defense and usually All-League there too,” Darwood pointed out.

“Six of the 12 were baseball standouts as well,” Darwood said. “Kerby Court was a four-sport standout as he was a great golfer and placed ninth at state his senior year. Two were tennis standouts.”

“All of the ratings are totally just my opinion of course and I’m sure that there are those that would disagree,” Darwood explained. “I hope I don’t offend any former Lions ball players who might feel slighted as a result.”

“My former high school coach and mentor, Gene Nelson, who coached seven seasons off and on at Liberty Bell from 1974-79 and 1985-86 and served as athletic director for 15 years, may have a different opinion,” Darwood said, “but I’d lay money it wouldn’t vary much.”

The former coach had a few more interesting facts to share from his decade-and-a-half retrospective.

In 1985-86, Monte Temple set the LBHS rebounding record with 25 rebounds in a single game.

The Mountain Lions JV played the Brewster JV in a four-overtime thriller during the 1984-85 season that was “what I believe to be the longest recorded game for an LBHS team,” Darwood said.

“We always felt shortchanged in basketball, bouncing back and forth between league classifications every few years, having in the A leagues to battle teams like Ephrata and Quincy (now 2As) and power programs like Cashmere, Tonasket and Leavenworth,” Darwood said. “There wasn’t much of a difference down in the Bs versus power programs like Brewster, Peshastin-Dryden, Waterville and Coulee City.”

“The teams we lost out to at districts whether in A or B usually went on to win the state title and the second league rep at state would also place,” Darwood recalled. “Tough leagues. Some of the toughest in state.”

Darwood left coaching in 1989 to enter the wildland firefighting business. He is currently the Firewise Fuels Reduction Foreman for Eastern Washington for the Spokane Division of Chewack Wildfire, owned by Todd Graves (LBHS 1978). Darwood is also a wildland firefighter engine boss and strike team leader for Chewack. He is half-owner of M&D Construction in Spokane and lived there from 1989 until 2005 when he returned to Omak to help sister, Neta, care for their ailing father, Bud Darwood, who died in December 2012.

Bart Northcott poses with a gigantic traveling trophy his team, the Methow Valley Merchants, won at a weekend tournament of town teams in 1984 (Photo from MV News archives); Great leaping ability was one of the talents that helped Daren Belsby lead the Mountain Lions to state in 1984 (Photo courtesy of Daren Belsby); Kerby Court, who played varsity basketball for Liberty Bell from 1987-89, scored 1,084 points to become the second -highest scorer in school history behind Ray Ellis. (Photo from MV News archives/David Wilkinson); Ray Ellis, shown here shooting in practice, was “the best guard in the first 16 years” at Liberty Bell, according to teammate Scott Darwood (Photo courtesy of Liberty Bell Yearbook).